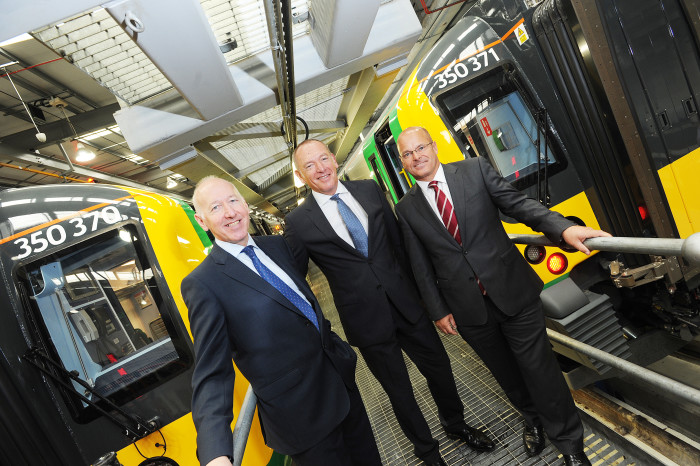 Commuters will soon see more frequent and improved trains in service on London Midland routes, thanks to a significant Government investment in new rolling stock.

The fleet of brand new electric trains, which will bring thousands of extra seats, are being provided by London Midland, Siemens and Angel Trains, following £62m of investment from the Department for Transport.

Although the ten new Class 350/3 Desiro units are due to enter service in London and across the West Midlands from December, some of the new trains will be brought into service more than two months early, from Monday 6 October. The trains will be used to lengthen some of the busiest morning and evening peak services into and out of London Euston, before the new winter timetable comes into effect on Sunday 14 December.

Three morning services; the 06.18 Northampton – London Euston, the 07.15 Bletchley – London Euston and the 08.26 Tring – London Euston will all be extended from the current eight car formation to 12 cars – providing a total of 690 seats on each service.

Rail minister Claire Perry said:
“As part of our long-term economic plan, we are investing record amounts in transforming the rail network, providing more seats, more trains and better journeys for millions of passengers. Over the next five years, more than £38bn will be invested in building a world-class railway across the country.

“It is fantastic news that London Midland’s customers will start to enjoy this much-needed extra capacity earlier than expected, and I am looking forward to seeing the remaining trains start running from December.”

All standard class saloons in the new trains have plug sockets, catering to business travellers along the busy route, and there will also be more on-board litterbins and two-plus-two seating.

The Siemens-built trains will be leased to London Midland by Angel Trains, the train leasing specialist.

Patrick Verwer, Managing Director of London Midland said,
“We are committed to improving the overall journey experience for our passengers, and adding more carriages to some of our busiest train services over the next few weeks will make a real difference to our London bound commuters”.

“This investment will also allow us to deliver more passenger services on the Cross City line between Birmingham and Redditch from December – our busiest commuter route in the West Midlands”.

Steve Scrimshaw, Managing Director of the Rail Systems business at Siemens, said:
“This significant £62 million investment is part of Siemens’, and London Midland’s, ambitious plans to ensure more frequent services and improve the overall commuter experience in and out of the capital.

“We are delighted to be working with London Midland and Angel Trains to bring these next-generation trains to one of the busiest commuter routes in the country.”

Kevin Tribley, Chief Operating Officer of Angel Trains said,
“This is another significant investment by Angel Trains in the UK’s rolling stock.

“Since privatisation, we have put £3.5 billion in the UK rail industry, making us one of the largest investors in the industry. We are delighted to work with London Midland to procure and finance the new units from Siemens which will bring real benefits to London Midland’s passengers”

Rob Brighouse to step down as Managing Director of Chiltern Railways