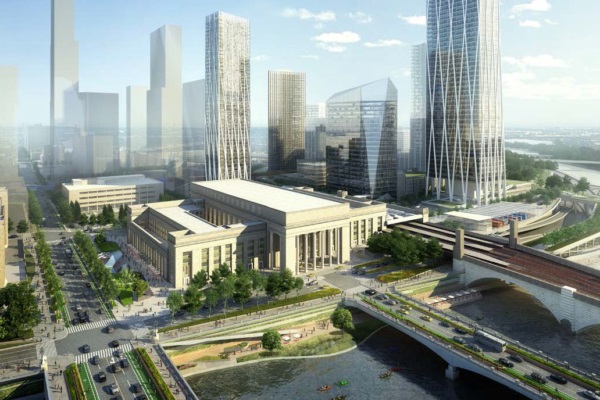 The 30th Street Station District Plan has been honored with the architecture industry’s most prestigious award – a 2017 Institute Honor Award for Regional and Urban Design from the American Institute of Architects.  The District Plan was selected from more than 500 submissions from around the world.

The award underscores the importance of the collaboration among the project Principals (Amtrak, Brandywine Realty Trust, Drexel University, PennDOT and SEPTA) in developing the Plan, with guidance from a coordinating committee and input from members of the public.

“On behalf of the 30th Street Station District Plan partners, we gladly accept this award and appreciate the endorsement it represents of the hard work that went into developing the Plan,”
said Natalie Shieh, Project Director.
“We are enthusiastically moving forward on implementation, to take this inspiring vision and realize its great promise to transform the 30th Street Station District into Philadelphia’s next great neighborhood.”

“The District Plan beautifully reimagines one of Philadelphia’s greatest assets at the center of a world-class urban district,”
said Skidmore, Owings & Merrill Director Kristopher Takács, AIA.
“SOM is honored to have led an extraordinary team of professionals, future-leaning institutions, and committed citizens to envision a pivotal transformation.”

The District Plan is a comprehensive vision for the future of the area surrounding 30th Street Station in the year 2050 and beyond. In the near term, Amtrak and its partners are strategically advancing key projects to activate all four sides of the station and build a foundation for future growth and development.  In November 2016, Amtrak issued a Request for Proposals to lease and develop a roughly 32,500 square foot tract of land and associated air rights adjacent to 30th Street Station.

The Plan ultimately envisions 40 new acres of open space and 18 million square feet of new development, including an entirely new mixed-use neighborhood anchoring the District atop 88 acres of rail yards along the western bank of the Schuylkill River.  With a proposed $2 billion investment in roads, utilities, parks, bridges, and extension of transit services, the Plan has the potential to unlock $4.5 billion in private real estate investment with robust and widespread economic benefits.  An estimated $3.8 billion in City and State taxes and 40,000 new jobs would be created.

This is the second of Amtrak’s major development projects to receive recognition from the American Institute of Architects in the past several years.  In 2014, the Washington Union Station Master Plan received honorable mention in Urban Design/Master Planning from the AIA Washington Chapter.