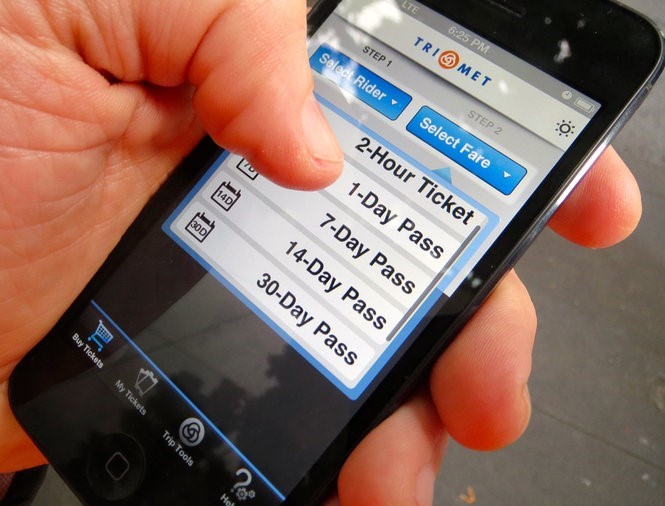 In September 2013, with the help of GlobeSherpa, TriMet became the first mass transit agency in the US to launch a free mobile ticketing app for both rail and bus services, which was set to make waiting in line, and relying on paper tickets a thing of the past. Last week, TriMet celebrated the app’s one-year anniversary, and it has certainly not disappointed.

TriMet, a public agency who provide mass transit for the metropolitan area of Portland, Oregon, including commuter rail lines and Portland’s main bus system, joined forces with Portland based mobile software developers, GlobeSherpa, to create the free to download mobile ticketing app. The app, which launched in the fall last year, and available to smart phone users, allows riders to purchase and use tickets on the go, without the hassle of queuing or searching pockets for spare change. Riders are able to buy a range of tickets, from one-way trips to monthly passes, using their debit or credit card all at the touch of a button. Once purchased, users receive an animated ticket, to be validated visually by conductors, or as an encrypted barcode to be scanned.

In only one year, the app has received over 127,838 downloads, with nearly 2 million tickets being sold via the app, amounting in revenue of around $8.4 million. First year demographics show that a staggering 96% of total users are adult riders and 76% of riders use the app to purchase 2-hour tickets and Day passes.  Within an age of increased e-commerce and the ability to access the internet on the go, it is not surprising that the app has received such a popular response. A recent survey conducted by Pew Research, reported that 58% of American adults have a smartphone with 60% using their phone to access the internet.  In 2013, Statista reported that US mobile commerce revenue amounted to more than 38 billion dollars, which included purchasing of tickets.  These figures certainly outline a growing demand for convenience, especially when it comes to purchasing goods.

In a written statement, TriMet General Manager, Neil McFarlane, expressed his surprise for the app’s overwhelming popularity; “Frankly, the use and enthusiasm over the mobile ticket app has been surprising. We are always looking for improvements that benefit our riders, and we knew mobile ticketing would provide them a new convenience, we just didn’t know how quickly they would embrace it.”

However, like all mobile applications, the app is not immune to occasional technical glitches, which have left users with blank screens, missing information and the app freezing. Though these issues were only experienced by a small % of users typically on the Android platform, who along with GlobeSherpa have created an update that they are confident will fix these problems. Whilst the perrenial challenge of phone battery is helped by the handy reminder on their website help section to ‘watch your battery level’.  Although these problems can highlight the inescapable issues that come with using such a platform TriMet remain adamant that the pros out way the cons.

TriMet are not the only transit company to jump on the success and potential revenue saving mobile ticketing can offer. In 2012, MBTA became the commuter rail agency to adopt mobile ticketing in an attempt to reduce the cost and inconvenience of paying for tickets cash in hand with the help of the British mobile- ticketing company Masabi. In just nine months, after its launch, MBTA had sold over 1 million tickets via the app, totaling over $10 million in sales. In another example, New York MTA announced this April that they are working with Masabi to create a mobile ticketing app for both the Metro- North Railroad (MNR) and Long Island Rail Road (LIRR). After seeing the success of TriMet’s app, Virginia Railway Express formally announced their partnership with GlobeSherpa earlier this year to create a mobile ticketing system for their riders.

TriMet, however, are not just stopping at the app. Building upon its success, TriMet are set to continue working with GlobeSherpa to create an account based e-fare system, which will replace the currently outdated fare collection system in place. TriMet claims the new system will reduce the dependence on mechanical equipment including transit vending machines and fare boxes by allowing riders to top up transit fares onto cards at retail stores and online. However, the public will have to wait until after 2017, when the changes begin, to take full advantage of the e-fare system.

TriMet are confident that these changes will share the success of the recently launched mobile app, however we will have to wait to see if e-fares can truly revolutionise ticketing or whether reliance upon ticketing kiosks and machines will still remain.

“As America grows, so must our investments in transportation”