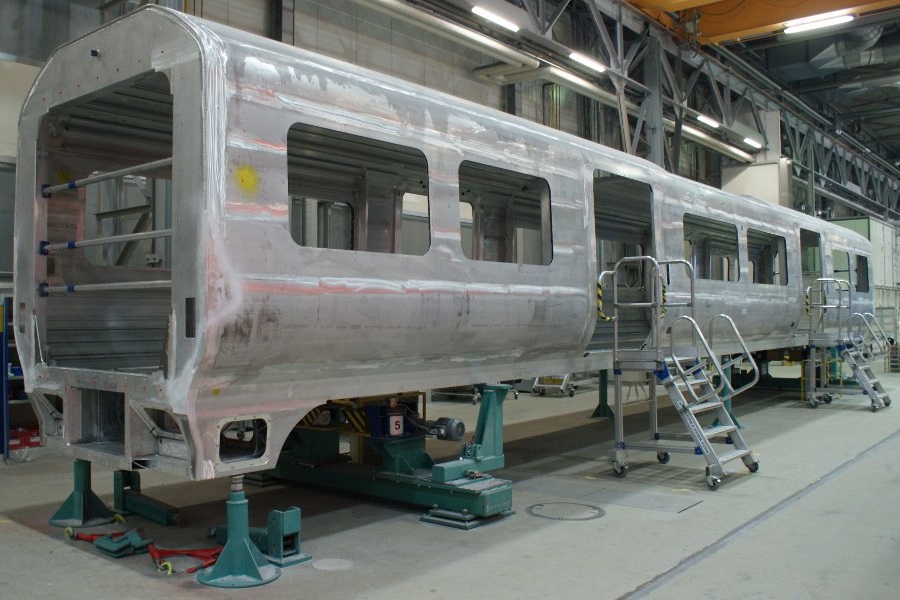 The plan to introduce a £210 million fleet of brand new trains for South West Trains (SWT) passengers has passed an important milestone. Construction of the first Siemens-built Class 707 Desiro City trains is now underway with the main body of the train created and assembled.

This marks the first stage of development for the new trains which will run between London Waterloo and Windsor, improving passenger facilities and increasing space for passengers on some of the busiest services in the country.

All design work for the £210 million fleet of 30 five-carriage trains has been finished and the first unit is expected to be built by the end of February 2016. The first new train will then begin testing in May 2016 before being delivered by leasing company Angel Trains to SWT’s Wimbledon depot in time to start passenger service in June 2017. During this time, all units will be extensively tested to ensure reliability and provide SWT staff the opportunity to train on the new trains and become familiar with the new systems before they enter passenger service. It is expected that all of the new fleet will be delivered by the end of 2017.

The new Desiro City trains will significantly increase space for passengers and improve the on-board facilities. They feature state-of-the-art technology, are lighter than existing fleets and are much more energy efficient. The trains also feature a light and airy, air-conditioned environment, better on-board train information systems and free passenger WiFi. They also have ‘open gangways’ meaning passengers can both see through and walk the length of the train much more easily.

The new trains will boost capacity for SWT passengers, allowing more than 18,000 extra passengers to travel in and out of London Waterloo during the busiest times of the day. When they are introduced, it will allow other existing SWT trains to be moved to other parts of the network – increasing capacity on other key routes.

Commenting on progress, Steve Scrimshaw, Managing Director, Rail Systems at Siemens, said:
“The start of manufacture for a new fleet of trains is always an exciting milestone. It gives a sense of real progress to a project that up until now has lived on paper, technical drawings and computer.”

“We are now turning the designs into reality and drawing closer to the next key milestone, the first complete train running around our test track before the ultimate goal, delivering new, spacious and comfortable trains that really improve the passenger experience.”

Christian Roth, Engineering Director for South West Trains, added:
“The introduction of the brand new Class 707 Desiro City trains is an absolutely crucial part of our plans to provide the biggest increase in capacity on this network for decades. When delivered, these new trains will provide a major increase in spaces for passengers as well as much improved facilities, including better accessibility and free WiFi.”

“We are delighted manufacturing is now underway and look forward to welcoming the first units to the UK.”

Malcolm Brown, Chief Executive Officer for Angel Trains, said:
“With significant population growth it is essential that London’s transport network can adapt to meet the capital’s current and future needs. Angel Trains is committed to investment in London’s rail network and we are delighted to be working with Siemens and Stagecoach South Western Trains to procure and lease this new fleet of new Class 707s which will bring much needed additional capacity and an improved passenger experience to the system from next year. ”