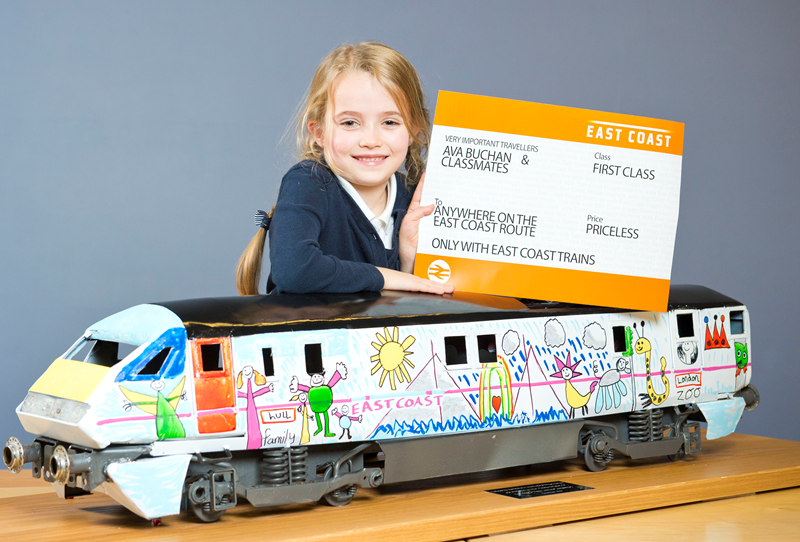 Talented Yorkshire youngster Ava Buchan is the pride of her school after scooping an East Coast trip for her entire class with her drawing of a happy journey by train.

Five-year-old Ava, a pupil at Swanland Primary School in Hull, won first prize in the competition organised by the train operator.

Her winning drawing has been reproduced on a large-scale model of an East Coast locomotive, made from recycled train parts by artist Ptolemy Elrington.

The competition forms part of East Coast’s activities to raise profile and funding for its adopted charity, Railway Children, which supports vulnerable children in the UK, India and East Africa.

Ptolemy, East Coast and Railway Children visited Swanland Primary School to show the finished model to Ava and her classmates for the first time, and to give a talk to the youngsters about how the model was made.

Children up and down the East Coast route were asked to submit a picture that represents a ‘Happy Journey’ to celebrate five years of service on the line, while helping to promote Railway Children. Ava’s picture was chosen from almost 1,000 entries by famous children’s author and illustrator Judith Kerr and CBeebies children’s TV star Mister Maker.

On winning the prize, Ava said:
“I drew a picture that reminded me of a happy journey to the zoo. I am very excited to win and can’t wait for my class trip on the train.”

East Coast Managing Director Karen Boswell, said:
“This competition has provided a great opportunity to showcase creativity and support a charity very close to our hearts. It was extremely hard to narrow down to the winning competitions due to the vast number of very creative and unique drawings.”

Runners-up Shira Inglis, 11 from London and Georgina Stamp, 10 of Billingborough, near Sleaford in Lincolnshire, have also won First Class tickets for their families to travel anywhere on the East Coast route. All three finalists will receive a signed letter of congratulations from Mister Maker and a signed copy of Judith Kerr’s book, The Tiger Who Came to Tea.

Competition judge Judith Kerr said:
“I chose Ava’s drawing because I particularly liked the imaginative way that Ava included the things that she liked and the giraffes at the zoo. It was great to see so many children’s drawings inspired by journeys.”

The train operator’s services link London with the East Midlands, North East England and Scotland. Since taking over in November 2009, East Coast has significantly improved the travelling experience, and the company says the competition is an opportunity to share its success with customers along the East Coast route.

Swanland Primary School Headteacher Chris Huscroft said:
“We are delighted that Ava has won the competition and look forward to the opportunity to take the children on a trip. All the children are really excited and looking forward to making a happy journey with East Coast.”

Competition judge Mister Maker added:
“All of the entries were great and it was very difficult to shortlist! I loved Ava’s drawing though – it had some lovely themes and almost four seasons on one train. I could really tell what her happy journey meant to her. Stay arty Ava!”