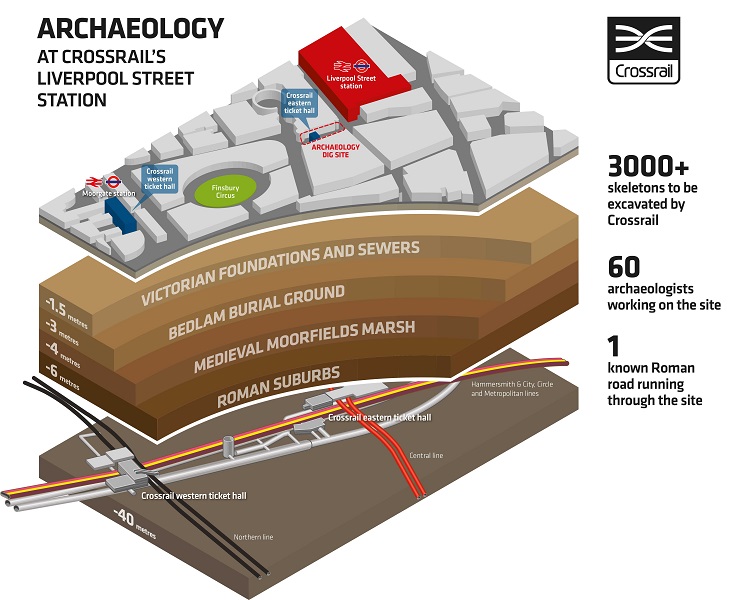 Archaeologists have started excavating around 3,000 skeletons from the Bedlam burial ground at Liverpool Street in the City of London.

The excavation will allow construction of the eastern entrance of the new Liverpool Street Crossrail station. A team of 60 archaeologists will work in shifts, six days a week to remove skeletons and carefully record evidence for what may prove to be, in archaeology terms, London’s most valuable 16th and 17th-century cemetery site. The excavation is being undertaken by MOLA (Museum of London Archaeology) on behalf of Crossrail.

The Bedlam burial ground was in use from 1569 to at least 1738, spanning the start of the British Empire, civil wars, the Restoration, Shakespeare’s plays, the Great Fire of London and numerous plague outbreaks. 2015 marks the 350th anniversary of London’s last Great Plague in 1665 and archaeologists hope that tests on excavated plague victims will help understand the evolution of the plague bacteria strain.

Jay Carver, Crossrail Lead Archaeologist said:
“This excavation presents a unique opportunity to understand the lives and deaths of 16th and 17th century Londoners.  The Bedlam burial ground spans a fascinating phase of London’s history, including the transition from the Tudor-period City into cosmopolitan early-modern London. This is probably the first time a sample of this size from this time period has been available for archaeologists to study in London. The Bedlam burial ground was used by a hugely diverse population from right across the social spectrum and from different areas of the City.”

Nick Elsden, Project Manager from MOLA said:
“Construction for Crossrail is providing rare and exciting opportunities for archaeologists to excavate and study areas of London that would ordinarily be inaccessible, such as under established road-systems. There are up to six metres of archaeology on site, in what is one of the oldest areas of the city, so we stand to learn a great deal.”

The research also aims to shed light on migration patterns, diet, lifestyle and demography of those living in London at the time. Excavated skeletons will be taken to MOLA for testing by osteologists (bone specialists) before being reburied in a consecrated burial ground.

The skeletons will be excavated over the next four weeks, after which archaeologists will dig through medieval marsh deposits and Roman remains. A Roman road runs under the site, which has already yielded several interesting Roman artefacts such as horseshoes and cremation urns. Archaeologists are expected to finish onsite in September, after which construction will proceed on the new eastern ticket hall by contractor Laing O’Rourke.

Bedlam is London’s first municipal burial ground and was located just outside the original City Wall. It was used by people from around London who could not afford a church burial, or who chose to be buried there for religious or political reasons. It was also used as an ‘overflow’ cemetery when existing sites were full, including in times of plague.  Famous 17th century political ‘Levellers’ such as John Lilburne and Robert Lockyer are believed to be buried there.

To date Crossrail has found more than 10,000 artefacts spanning 55 million years of London’s past across over 40 construction sites. It is the UK’s largest archaeology project. Preliminary excavations at the Liverpool Street site in 2013 and 2014 uncovered more than 400 skeletons and numerous artefacts.