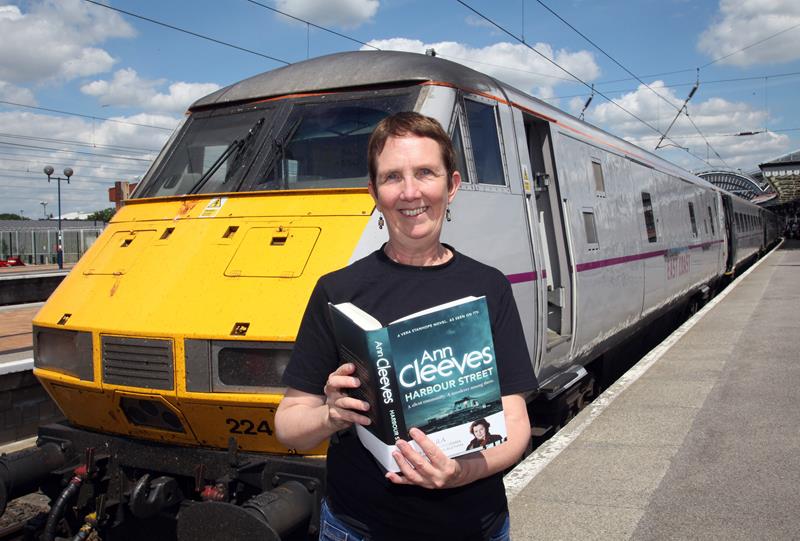 Ann Cleeves, the bestselling author of the Vera and Shetland novels which have been adapted for television, met fans at an exclusive book signing event on-board an East Coast train today (Thursday 17 July 2014).Customers on-board the 11:08 East Coast service from London King’s Cross to York were able to meet the award-winning author, who was travelling to Harrogate to speak at The Theakstons Old Peculier Crime Writing Festival in the Yorkshire spa town. “We’ve been delighted to welcome Ann on-board today and pleased to see so many people taking the opportunity to meet her and pick up a specially signed copy of her latest book.”Ann was awarded an Honorary Doctorate of Letters by the University of Sunderland on Tuesday, 8 July 2014, in recognition of her outstanding achievements as a crime writer. She is one of the main guest speakers at The The Theakstons Old Peculier Crime Writing Festival in Harrogate which opens today. Sharon Canavar, CEO of Harrogate International Festivals which hosts the Theakstons Old Peculier Crime Writing Festival, said:“It may not quite be Murder on the Orient Express, but it’s rather apt that a London to Yorkshire East Coast train journey is celebrating crime fiction. “Harrogate, of course, has a long crime writing tradition with Agatha Christie. We host the Theakstons Old Peculier Crime Writing Festival – now the biggest celebration of crime fiction in the world – taking place at the Old Swan Hotel where Christie was discovered after her famous disappearance in 1926.“London trains will be popular with authors and readers from around the world travelling to Harrogate today (Thursday 17 July 2014). Ann Cleeves is one of our very special guests who’ll be joining up to 80 authors in attendance this year, including Robert Galbraith (J.K. Rowling), Lynda La Plante and Val McDermid. “Ann was also the Festival’s original Reader in Residence and is passionate about bringing books to new audiences, and there’s certainly no better time to indulge in a criminally good read than on a train journey.” Full details of East Coast services between London and North Yorkshire, including the daily direct service between London and Harrogate, are available online at www.eastcoast.co.uk