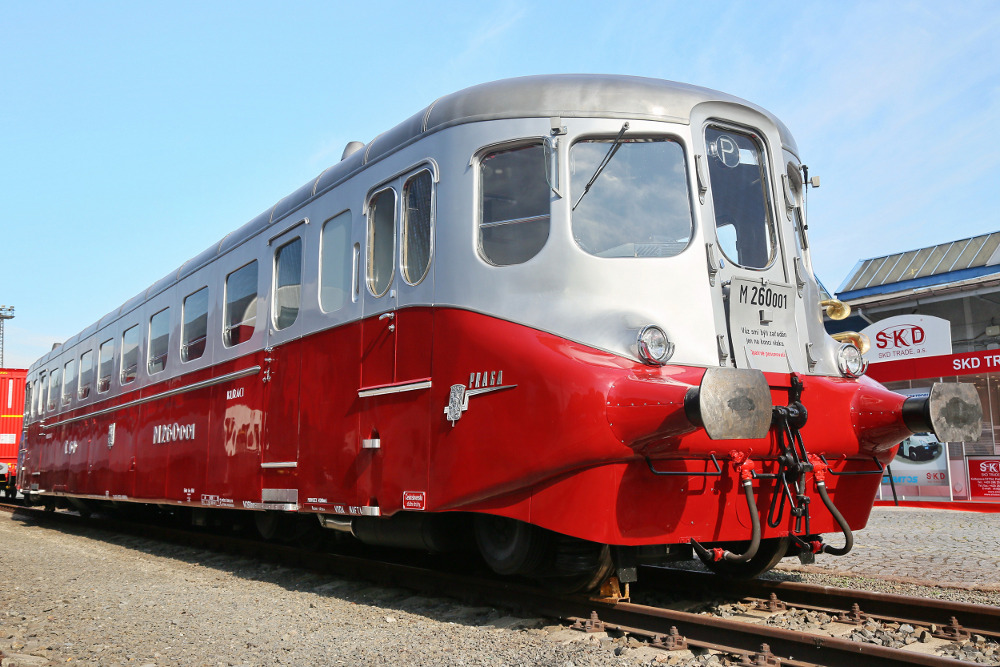 ČD presents the historic Silver Arrow railcar at the Czech Raildays
exhibition.
ČD is a traditional exhibitor at the Czech Raildays exhibition and together with our subsidiaries we are presenting innovations in our activities and in our broad offering of services. As the Czech Republic’s national carrier, a key player on the Czech railway and a
customer-oriented company, we provide services to a wide spectrum of clients. Logically, the most attractive elements of this trade fair are the rail vehicles themselves, many of which bear the colours of the national carrier or of its subsidiary, ČD Cargo. Despite significant
investments into modernising our rolling stock, we do not overlook the preservation of our cultural and technical heritage, including many unique historical objects. The result of our efforts is the demanding repair of the Silver Arrow (“Stříbrný šíp”), which has been “reborn” under the care of our subsidiaries VÚŽ, a.s., (Railway Research Institute) and DPOV,
a.s., (Vehicle Repair Workshops). The interest of the expert and lay public has confirmed our belief that this expenditure to preserve a unique technical monument is important,” explains Pavel Krtek, ČD’s Chairman and CEO. Railcar M 260.001, also known as the Silver Arrow, was repaired and ceremoniously unveiled on 14 June at the Czech Raildays exhibition in
Ostrava.

Railcar M 260.001 Silver Arrow
The legendary Silver Arrow was built by the ČKD locomotive works in Prague based on a request from state railway company ČSD in 1936 for a fast and economical rail vehicle for deployment on less-utilised inland fast and regional fast train connections. In cooperation with automobile manufacturer PRAGA, located in Prague’s Vysočany district, a unique
vehicle was created that was ahead of its time in many respects. Especially the manner in which the frame and cabin body were executed using a series of aluminium and lightweight steel components ranks the Silver Arrow’s production technology alongside that used in aircraft manufacturing. Both its interior and the cabin body were very carefully designed, and the latter was that of an elegant aerodynamic express train comparable in Czechoslovakia at the time only to the Slovak Arrow (“Slovenská strela”), which had been introduced several years earlier. Despite the fact that it was designed for what was then 3rd carriage
class, the Silver Arrow was unusually comfortable for its time. Up to 64 passengers could sit in leather-upholstered seats with headrests, and numerous chrome accessories contributed to the vehicle’s distinctiveness. The Silver Arrow was originally constructed for speeds of up to 130 km/h, but due to insufficient braking power it was permitted to travel only 90
km/h. Unlike the Slovak Arrow, it was also equipped with bumpers, couplings and a front-end door for connection with other carriages for the purpose of creating trains with greater capacity.

The railcar was ceremoniously unveiled to the public on 14 March 1939.
Unfortunately, the German occupation and subsequent war halted not only the further development and use of the Silver Arrow but also the operations of most of ČSD’s railcars. The Silver Arrow was thus put into operation only in 1948 following repairs and final approval. With inferior performance, it ran only 50,000 kilometres and was taken out of service permanently in 1952, only to await its rebirth. The railcar’s actual comprehensive overhaul began in 2011, when it was moved to the DPOV workshops in Nymburk. It was purchased by VÚŽ in 2014, and the demanding repair was completed this year in cooperation with DPOV.

Hitachi Rail Italy wins a new contract from Trenitalia worth 190...