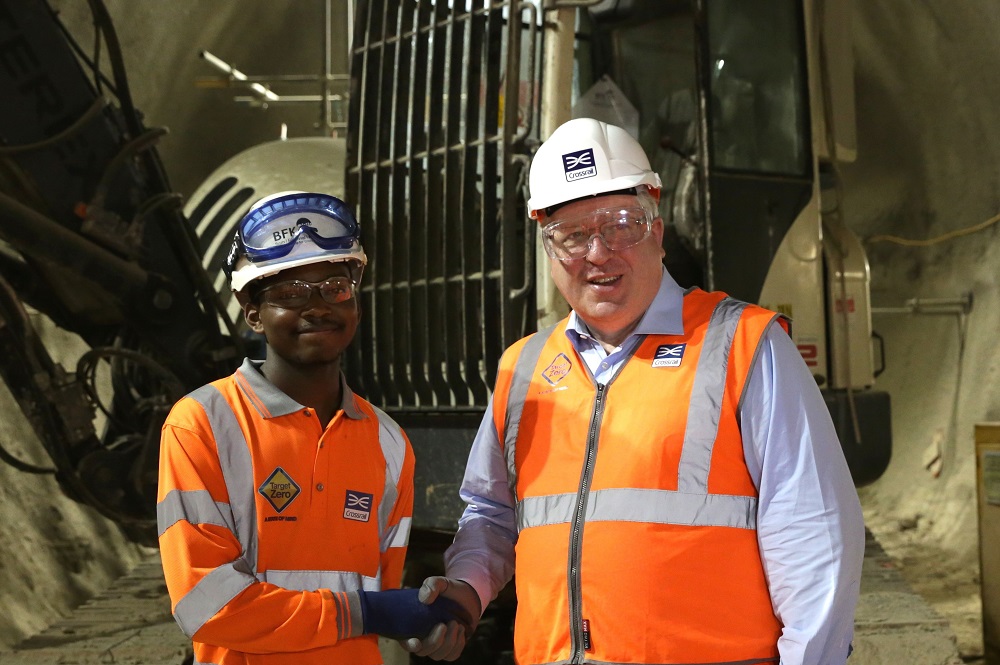 Bam Ferrovial Kier (BFK), one of the major contractors delivering Crossrail, has appointed its 100th apprentice.

The appointment of Jordan Malcolm-Taylor, 20, from Haringey, was celebrated by Patrick McLoughlin, Secretary of State for Transport, when he visited the Farringdon Crossrail site earlier today.

Jordan joined the team working on the Farringdon Crossrail station in May. Previously unemployed, he was recruited from Crossrail’s Tunnelling and Underground Construction Academy in Ilford and works on the team as an apprentice carpenter.

Patrick McLoughlin, Transport Secretary said:
“Crossrail is leading the way in developing a new generation of skilled workers, and it is great to see young people like Jordan embrace the opportunities on offer.

“By investing record amounts in the rail network, we are not only transforming journeys for millions of passengers, we are also creating a skills legacy that will boost our construction and engineering industries for decades to come. Today’s announcement is proof that our long-term plan to create jobs, invest in young people and secure lasting economic growth is firmly on track.”

Boris Johnson, Mayor of London said:
“It is fantastic that so many young people have been given the opportunity to contribute to one of the world’s most ambitious infrastructure projects, learning valuable, transferable skills along the way. I would encourage other employers to follow BFK’s lead and offer apprenticeships, giving this eager, enthusiastic workforce the chance to drive forward London’s vibrant economy.”

Jordan Malcolm-Taylor, Carpenter Apprentice for BFK at Crossrail Farringdon said: “I enjoy being a Bam Ferrovial Kier apprentice; I always wanted to get into learning the construction trade. I chose carpentry as I like being creative and working with my hands. This apprenticeship has influenced me to be more independent and is preparing me to take on new responsibilities.”

Luis Amorim, BFK Joint Venture Managing Director said:
“The construction industry needs 120,000 apprentices over the next five years to fill an emerging skills gap. Although employing our 100th apprentice may feel like a ‘drop in the ocean’ against this challenging background, we are very proud of having trained one in every four apprentices across the whole of the Crossrail programme. And we will not stop at our 100th apprentice; Bam Ferrovial Kier JV is fully committed to engaging with young people in our local communities from all walks of life, to develop them through their vocational choices, for as long as we are jointly delivering this exciting Crossrail programme.”

Andrew Wolstenholme, Crossrail Chief Executive said:
“We set ambitious targets for ourselves and our contractors to employ apprentices. The response has been phenomenal. BFK deserves special commendation for taking on their 100th apprentice. Every apprentice employed on Crossrail has developed new skills, helping their careers, but also improving the UK’s skills base too. We want our approach to apprentices to be adopted by future infrastructure projects, helping with youth unemployment and filling skill gaps in the industry.”

BFK has built the two railway tunnels that run between Paddington and the new Farringdon Crossrail station. It is also building the station tunnel caverns at Bond Street, Tottenham Court Road and all the works at Farringdon.

From 2018 Farringdon will become one of the UK’s best connected train stations, linking Thameslink, London Underground and Crossrail. More than 140 trains will pass through the station every hour including 24 Crossrail trains an hour in each direction during peak times; 16 Thameslink trains per hour to London Bridge and 24 trains an hour to St Pancras and Blackfriars. Farringdon will directly link to three of London’s five airports and to St Pancras International for Eurostar services.

Since 2009, TfL and its supply chain have created over 5,000 apprenticeship roles in support of the Mayor’s campaign. The apprentices are making a vital contribution to London’s economy supporting the investment and improvement of London’s transport network.