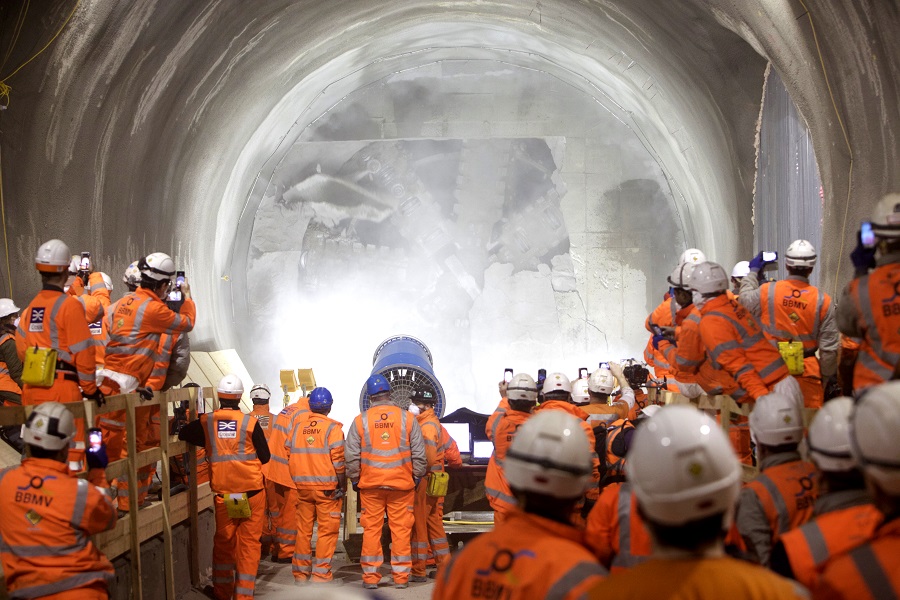 Tunnel machine Elizabeth, named after HM The Queen, successfully broke in to the eastern end of Liverpool Street Crossrail station this morning.

The breakthrough, 40m beneath the City of London, is part of Crossrail’s longest tunnel drive, 8.3km from Limmo Peninsula, near Canning Town, to Farringdon.

Elizabeth now has 750m of tunnel to bore, before arriving at her final destination at Farringdon station. Elizabeth will finish her tunnel drive and link all Crossrail tunnels for the first time with the big east/west breakthrough at Farringdon in the spring.

Her sister machine Victoria will arrive at Farringdon a few weeks later. On completion, a total of 42km of tunnel will have been bored as part of Europe’s largest infrastructure project. 40km out of 42km have now been constructed.

Elizabeth and Victoria each weigh 1,000 tonnes, are 150m long and over seven metres in diameter. They are the last of eight Crossrail tunnel machines to have carved a route beneath London linking the West End, the City, Canary Wharf and southeast London.

Crossrail will boost the capital’s rail capacity by 10%, bringing an additional 1.5m people with 45 minutes commute of central London.

Andrew Wolstenholme, Crossrail Chief Executive said:
“We are now on the final countdown to the big east/west breakthrough at Farringdon, which will link all of Crossrail’s tunnels for the first time. This is a phenomenal feat of civil engineering that London can be justifiably proud of. The next challenge is to implement railway systems across the route, keeping the project on time and within budget.”

Liverpool Street is one of 10 new Crossrail stations being built in central and southeast London. When the TfL-run Crossrail service is fully open in 2019, it will give commuters easy access to destinations across London and the South East including Canary Wharf and Heathrow. The station will be located between London Underground’s existing Liverpool Street and Moorgate stations, with connections to both.

On 31 May this year rail services between Liverpool Street and Shenfield will join the TfL transport network. This will be the first phase of the introduction of Crossrail, which will be fully integrated with TfL services.

Free WiFi now available on over half of all South West...

Manufacturing – not just a man’s world