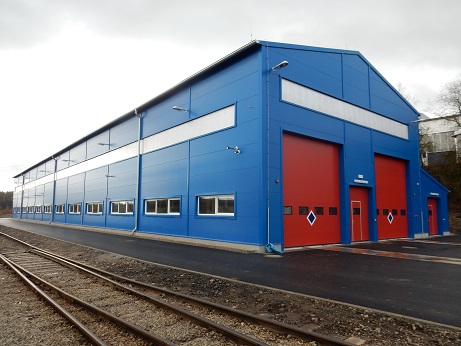 The two-track hall for repairs and maintenance of motor units, diesel
locomotives and other passenger rail vehicles opened in Rakovník today,
Czech Railways. The construction of the Swietelsky Building was built for
57 million crowns, including a warehouse and staffing facility. The
construction lasted from February to December 2017. A three-month trial
runs in the hall.

“The original repair rooms originally built for the maintenance of steam
traction have already failed to meet the current maintenance requirements
of new motor traction vehicles. Whether it is a length that did not allow
the repair of a complete unit or in some cases even equipment. With its
complexity, the new facility has greatly improved the conditions for
repairs and provides our employees with a modern work environment. Thanks
to this, we expect acceleration of repairs, increasing their quality and
reliability, which will positively influence the timetable or deployment
of the planned kits, “

said Miroslav Kupec, a member of the Czech Railways
Board of Directors, responsible for the engineering, service and property
segment.

“Today in Rakovnik there are 49 units of Regionova, almost a
quarter of all these two sets, which we are dealing mainly in Central
Bohemia and the Ústí nad Labem region. Improvement of service will be
recorded by a large number of passengers from Prague to Chomutov and Most,
”
added Miroslav Kupec.

“The hall is one complex fully equipped workplace for the repair of motor
units and separate vehicles. It measures seventy meters, allowing for
simultaneous maintenance of the four engine units of Region. This will
greatly reduce the time and financial demands for unpacking, maintenance,
shifting and transporting units to other locations, “
says Miroslav Mrázek, the construction manager of the Swietelsky Building West Building.

For example, a two-wheeled hall, equipped with, for example, a sliding
service bridges, a bridge crane with a load capacity of 5 tons, a pillar
channel or a lifting gear 8 times 25 tons, is also a workshop for
repairing vehicle components, sanitary facilities, staffing facilities and
spare parts warehouse. The usable area of the building is 1,016 m2 and
workshops and facilities are 207 m2. The hall was built in the eastern
part of the operational unit of Rakovník (locomotive depot) Depa of
railway vehicles in Plzeň.

The site where the fuel storage was located was used for the construction.
After its relocation, a new building with a total built-up area of 1 286
m2 was built. The hall is connected to the hall via the existing track of
the locomotive depot to the railway station in Rakovník railway station.