Home News How drones are already being deployed by railways around the world. 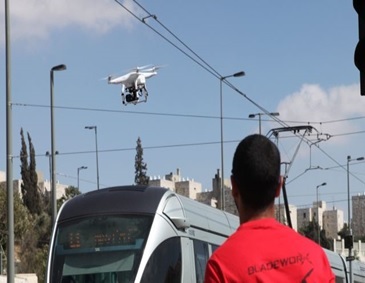 A report from Arup earlier this Summer, Future of Rail 2050 unveiled their vision of the future of rail travel in light of trends such as urban population growth, climate change and emerging technologies.

“The global urban population is growing rapidly and by 2050, around 75% of the world’s population will live in cities. This places huge pressure on transport infrastructure and resources, but also creates a significant opportunity for rail, which relies on passenger density to function most effectively” said Colin Stewart, global rail leader, Arup on the release of the report.

One of the most eye-catching developments featured in this fascinating study is the projected use of unmanned aerial vehicle’s (UAV’s), commonly known as a drones for predictive maintenance and security on the railway network.

The Arup report drew a strong response from British trade union, the RMT, with Mick Cash, its acting General Secretary claiming; “This report and its proposals are just dangerous nonsense straight out of some barmy work of science fiction. The notion of an entirely de-staffed railway with track workers replaced by drones could only have been cooked up by someone miles out of touch with reality.”

However, although predicting the future can be a notoriously difficult task, drones are already hard at work and today SmartRail World travels around the world looking at five examples of the use of drones in our industry.

Germany: Deutsche Bahn (DB), Europe’s largest railway and rail infrastructure operator began last year using drones in an effort to combat graffiti-spraying gangs. The metre wide drones, each costing €60,000 can fly for up to 80 minutes at a speed of 33 mph, can operate autonomously or be remotely controlled by a human operator. The drones’ motors emit little noise, making them ideal for surveillance. Removing graffiti costs DB €7.6million a year and its hoped these drones will help lower this annual cost.

USA: Union Pacific Chief Executive Officer Jack Koraleski, is looking at drones to improve the efficiency of maintenance on the network: “You could send a drone to do the inspection and then if it saw something you could send a person up to do the final inspection,” Koraleski said in an interview at Bloomberg’s headquarters in New York. “We’re just starting to explore what might make sense and how you could use them.”

(See also:The top 10 innovations that are shaping the future of rail and metro.)

Israel: For the light rail network in Jerusalem, the nation’s capital, drones are being deployed to act as extra surveillance following recent riots which saw stations and tracks of the line destroyed. “We in the city had made use of unmanned aerial vehicles (UAVs) for various purposes recently, and we thought this would be an excellent opportunity to make use of the technology,” Mayor Nir Barkat told The Times of Israel. “With UAVs, you get great high-resolution images taken from a birds-eye perspective, giving you the flexibility to zero in on any potential trouble spots in a way that ground level cameras cannot accomplish.” The drones would record video and images, which can then be analysed by the police to help narrow down culprits. (The main image from this story is courtesy of Bladeworx, Israel who are supplying these drones).

United Kingdom: The Winter storms of 2014, saw extensive damage to the infrastructure on the South Coast. Network Rail used a drone (the ‘orange hornet’) to monitor the rebuilding of around 100 metres of sea wall in Dawlish, Devon which was destroyed by the storms.

Video below (you may want to mute your computer as the video picks up the drone’s engine sound, which may prove uncomfortable for some).

Download the full Arup report Future of Rail 2050 for free by clicking the link. Arup are partnering and chairing Day Two of SmartRail USA (29-30th October, Charlotte, NC) which will feature a host of technical experts analysing, presenting and discussing the latest developments and innovations across rail and metro including IT, Telecoms, Operations, Passenger engagement, Fare Collection and much more. Click here to find out more.