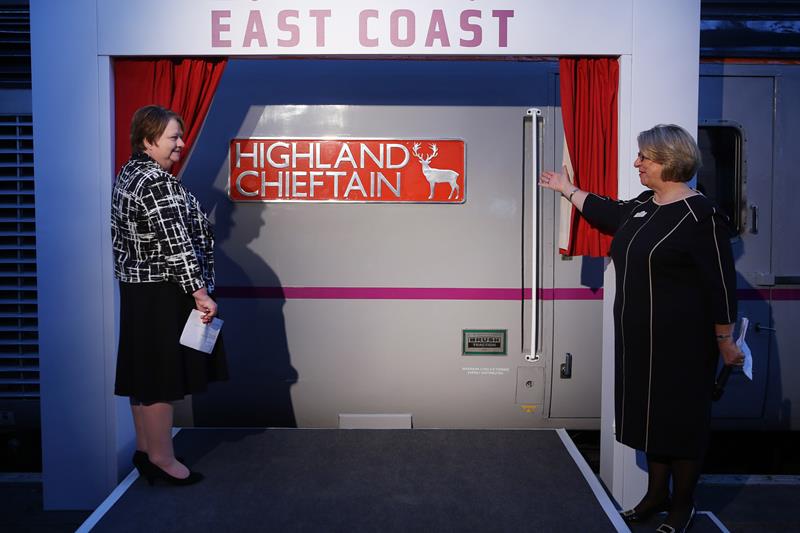 Thirty years of proud railway service to the Scottish Highlands has been celebrated in style today (Tuesday 30 September 2014) with the naming of an East Coast train at Inverness station.

The Highland Chieftain service has been connecting the Highland capital city of Inverness, Edinburgh and London daily since 1984 – providing a vital link for business and leisure travellers, and making an important contribution to the region’s economy.

Invited guests and passengers witnessed this morning’s ceremony prior to the train’s departure for London at 07.55, as a red and silver brass ‘Highland Chieftain’ nameplate was unveiled on the side of the locomotive by the Deputy Provost, to the sound of a traditional Scottish salute provided by a lone piper.

Depute Provost Cllr. Jean Slater said:
“As a regular user of this service I am delighted to be part of the celebrations here today. Everyone involved in this service should be proud of the standard of the dedicated on board train crew who go out of their way to make the journey special for both business travellers and visitors to the Highlands.
“With tourism being at the heart of the highland economy, the Highland Chieftain provides a vital link and gives travellers the chance to view our wonderful Highland scenery whilst travelling in comfort. With all the exciting developments taking place in and around Inverness and the highlands, I look forward to the Highland Chieftain continuing to play an important role in the future.”

Directly Operated Railways Chairman Doug Sutherland said:
“It’s a proud day for me personally, as a native of this fair city, to return home on this auspicious occasion for Inverness.
“Although this is as far north as we go with East Coast, it’s far from the end of the line for the railway. Inverness station stands proudly as the gateway to some of the finest and most stunning railway scenery in the world, on the Kyle and Far North lines.
“The city offers a warm Highland welcome and an enviable choice of attractions for the thousands of visitors we bring by this train directly to the capital of the Highlands.
“Over its thirty years, the Highland Chieftain service has contributed greatly to the economic and social well-being of this city and the wider region. Our newly-named train will now proudly promote the Highlands as it travels the 581.75 railway miles between Inverness and London King’s Cross.”

East Coast says the Highland Chieftain service is popular with business travellers, with on average 59% of First Class seats on the ‘Chieftain’ occupied north of Edinburgh, compared with 39% in First Class across the East Coast route as a whole.

East Coast Managing Director Karen Boswell said:
“This is a great day for all of us at East Coast, for the people of Inverness and the Highland region.
“With almost 20 million passenger journeys on our trains, up four and a half percent on last year, and an operating profit before tax and service payments to the Department for Transport of £225.3 million, the Highland Chieftain service continues to play an important role in East Coast’s success.
“For the future, we can look forward to a brand-new fleet of trains, the InterCity Express, entering service from 2018. The first prototype train is being tested right now in Japan, and construction work on a factory to build the trains in Britain is well underway.
“As we look forward to exciting times for our railway, we also look back with pride today at 30 years of the ‘Highland Chieftain’ service to this beautiful city and region. The ‘Chieftain’ is a very important contributor to the economic and social well-being of the Highlands, and we know from the feedback we receive from our customers just how important and valued the service is.”

The winner of a competition run in association with the Inverness Courier newspaper, John Duncan from Inverness, was a VIP guest at this morning’s naming ceremony at the city’s railway station. John, who correctly named the year the Highland Chieftain service was first introduced as 1984, was presented with his own full-size ‘Highland Chieftain’ nameplate as a memento of the day.