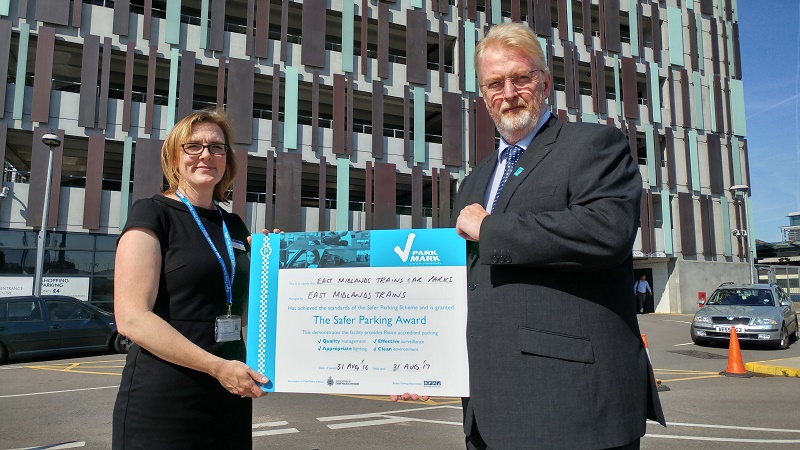 Dozens of East Midlands Trains stations and car parks are officially recognised for their safety and security by two national schemes.

58 stations, spread right across the network are now accredited under the Secure Stations Scheme, which is administered by the Department for Transport and British Transport Police and represents a national standard for passenger safety and security on Britain’s railway stations.

Of those 58 stations, 23 have been newly accredited following additional investment and operations by East Midlands Trains and eight have retained their accreditation. The remaining 27 stations received their Secure Station Awards in 2015 – they are valid for two years.

In addition, 33 train station car parks have also retained Park Mark, the Safer Parking Scheme award. This is a national standard for UK car parks that have low crime and measures in place to ensure the safety of people and vehicles. The scheme is administered by the British Parking Association and British Transport Police.

Sarah Potts, Crime and Security Strategy Manager, said:
“The safety and security of our customers is always our top priority, whether that is on our trains or in and around our stations.

“The Secure Station and Park Mark awards are a fitting recognition of our constant efforts and investment to provide safe and enjoyable journeys for our customer’s right across the network.”

Peter Gravells, British Parking Association Area Manager, said:
“I am delighted that East Midlands Trains has shown such commitment to the Safer Parking Scheme.  The awards are well deserved and clearly demonstrate the desire to provide the best customer experience possible, from car park to destination.  A lot of work goes on behind the scenes to maintain the standards required and all the staff should be congratulated for their efforts.”

Car parks with the Park Mark award can use signage featuring the distinctive Park Mark tick, so that drivers know exactly where to go for safer parking.  Early adopters of the scheme saw a dramatic drop in vehicle-related crime of over 80% showing that the initiative really does make a difference.

Personal safety and location have been cited as joint priorities when choosing where to park.  There are currently 5000 car parks with the Park Mark award throughout the UK which can be found on a designated website www.parkmark.co.uk

Nick Hughes: How technology is changing the game for an Innotrans...