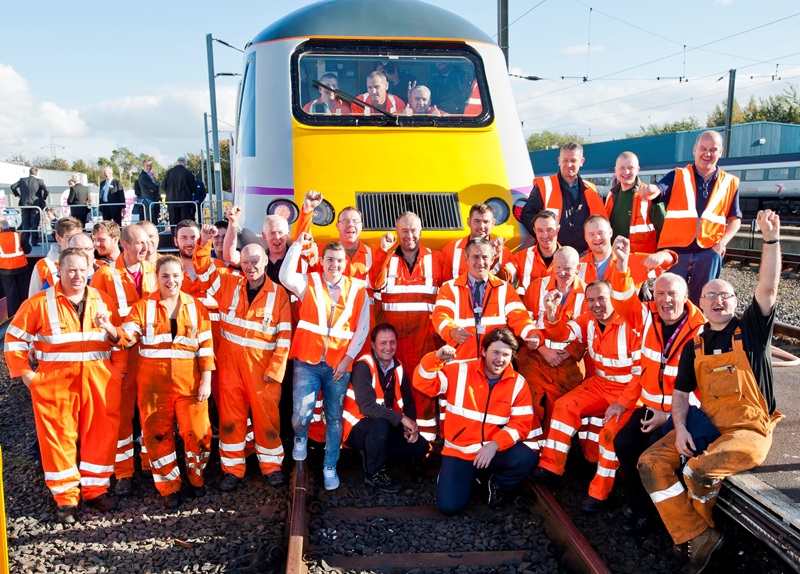 Train operator East Coast has today (Wednesday 1 October 2014) celebrated the centenary of its Craigentinny train servicing depot in Edinburgh by unveiling commemorative insignia and crests on its own flagship locomotive, which will be seen by millions of passengers from the Scottish Highlands to London.

Also in attendance at today’s unveiling was East Coast Managing Director Karen Boswell, and Cabinet Secretary for Justice and MSP for the Edinburgh East and Musselburgh constituency Kenny MacAskill.

The newly unveiled train features striking new insignia with the words ‘Craigentinny 100’, and two cast-iron crests, each bearing a Scottish thistle and the simple message ‘100 Years, 1914-2014’. The locomotive will carry its message across Britain, promoting the 100 years of service at Craigentinny Depot.

The diesel High Speed Train locomotive is based at Craigentinny Depot, and travels extensively throughout East Coast’s route network between Scotland and London, including on the company’s longest route, the 580-mile ‘Highland Chieftain’ service between Inverness and London King’s Cross.

Andy Cope told guests at today’s ceremony:
“Craigentinny depot opened in 1914 by the North British Railway to support its train fleet. The North British was established in 1844, and had begun operating trains on what is now the East Coast Main Line, initially as far as Berwick-upon-Tweed two years later, with the full line to London not opened until 1848.

“By a mixture of expansion and acquisition, the North British grew rapidly and by 1865 operated across about 450 miles of route. It was also in direct competition for supremacy in Scotland with its Glasgow-based rival Caledonian Railway, until it became part of the LNER in 1923. So, this depot was a busy place from its very beginnings.

“Over the years, Craigentinny has played host to some of the railway’s most famous locomotives, including Flying Scotsman and Mallard in the steam era, and the powerful Deltic steam locos into the 1960s.

“Craigentinny was extensively modernised in 1978 for the introduction of the High Speed Trains, or HSTs, to East Coast services. Today it’s the primary maintenance Depot for East Coast’s fleet of 14 HSTs, carrying out the full range of maintenance tasks, from light attention to heavy overhauls. Light maintenance on EC’s electric train fleet is also carried out here.

“The Depot also provides services for several other train operators’ fleets. Craigentinny continues to perform a vital role in keeping the wheels turning on the East Coast Main Line and beyond.”

Karen Boswell said:
“Craigentinny is East Coast’s main depot in Scotland, and plays an important role in the local economy and community in this part of Edinburgh. It is the place where humble carriage sidings opened at the start of the Great War in 1914, and grew to inherit the mantle of the once-great steam shed at St Margaret’s, becoming Edinburgh’s long-distance passenger train depot. Over the past hundred years, the East Coast route has seen many famous locomotives, including the iconic ‘Flying Scotsman’ and ‘Mallard’ in the steam era, and the powerful Deltic locos into the 1960s.

“Today, as well as providing an overnight base for the electric trains that operate the modern-day ‘Flying Scotsman’, Craigentinny is home to East Coast’s High Speed Train (HST) fleet which provide sterling service on our longest-distance routes, including the ‘Highland Chieftain’ which makes the 580-mile journey between Inverness, Edinburgh and London each day. The Craigentinny team also maintain trains for other operators including Cross Country and First Trans Pennine Express.

Originally built for what was then part of the former North British Railway from Edinburgh to Berwick-upon-Tweed, Craigentinny depot has a proud history of excellence in railway engineering that continues today.

The depot operates twenty four hours per day, seven days a week and 365 days a year. It is home to East Coast’s fleet of 14 diesel High Speed Trains, which serve its longest routes between Inverness or Aberdeen and London.

Kenny MacAskill said:
“Craigentinny depot has been part of the local community in the East of Edinburgh for a century. It has a long and proud history of railway workings and has acted as a vital maintenance hub that is integral to the UK’s rail network. It is an important part of our national rail heritage, and I am delighted that East Coast has marked its 100thanniversary with a locomotive which bears the proud name of Craigentinny.

“The East Coast railway line is hugely important to the economic health of a number of areas of the country as it is a key north-south artery. Over the past hundred years, Craigentinny depot has been one of the three main rail depots for the East of Britain and with 250 skilled employees at the depot, it is an important facility for us and the local community.”

The Craigentinny depot team is responsible for every aspect of locomotive engineering, from light maintenance, such as safety checks, cleaning and refuelling, to heavy-duty repairs.

As well as looking after East Coast’s own fleet, Craigentinny depot also carries out maintenance work for other operators, including Virgin, Scotrail and CrossCountry, Other occasional visitors to the depot include the prestige Royal Scotsman charter train, along with rail infrastructure owner Network Rail’s maintenance trains.