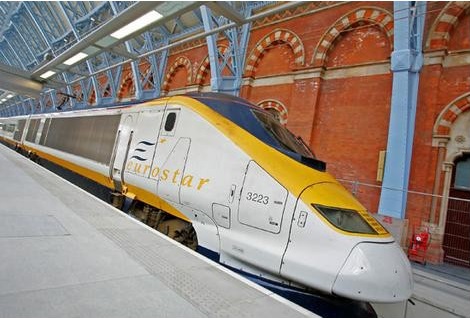 Article by Luke Upton
Eurostar, the high speed rail service between the UK and mainland Europe, has reported continued growth in both passenger volumes and sales revenues in the first half of 2014 despite some challenges from a number of different factors. In the first six months of the year, passenger numbers rose 2% to 5.0 from 4.9 million in the same period in 2013.  Sales revenues also grew by 0.5% to £456 million from £453 million in H1 2013. Whilst a new direct route to Marseille is also confirmed.

While Eurostar has reported today growth in both passenger numbers and sales revenues, the half year figures have been impacted negatively by a number of factors in the second quarter which, in combination, resulted in a softening in demand for leisure travel. These factors include the convergence of the Easter and May holidays in the UK which saw consumers travelling only once where they might normally have booked two trips.  Additionally, there was also a softening in demand for holiday destinations in northern Europe as well as the so called ‘World Cup effect’ which has seen many households delay or postpone their spending on leisure travel until after the final match.

Speaking at the launch of the results Nicolas Petrovic, Chief Executive, Eurostar;

“Whilst a number of factors in the second quarter of the year lead to a dampening in demand, we are now beginning to see a more benign trading environment with encouraging signs of economic stability in France as well as the UK.  These more favourable conditions have helped deliver strong growth in business travel across our markets.”

During the first half of the year, Eurostar has seen stronger levels of business travel bookings with the volume of business passengers rising 6% compared to the same period in 2013.  As well as the strengthening of the economy reported in the UK in recent quarters, Eurostar is now also seeing some improvement in France with encouraging signs of growth in business travel on both sides of the Channel.  The return to more normal levels of growth reflects signs of greater stability in the Eurozone economies. In addition to the overall growth in passenger numbers announced today, Eurostar is pleased to report continuing growth in the volume of international customers choosing to travel with Eurostar.  Over the first half of the year the number of international passengers rose by 7% compared to the same period in 2013.

This robust growth was, however, similarly impacted by a number of factors in the second quarter.  The number of travellers originating in South America, including Brazil, host nation of the FIFA World Cup, was substantially lower in Q2 as football fans stayed at home to enjoy the tournament. In the same three month period, consumer confidence in Australia has fallen to its lowest level in recent years also resulting in many consumers choosing to defer their travel plans.

Meanwhile a direct Eurostar service from London’s St Pancras to Marseille is set to launch in May next year, it has been revealed. The announcement of the year-round service – part of a wider plan to increase the number of destinations Eurostar serves – was made during a meeting of Ashford Borough Council, Kent Online reports. The length of the journey has not been confirmed but is likely to be around six hours and possibly travelling via Paris. Last year, it trialled a London-Lille-Lyon summer service over a six-week period. Ticket are expected to go on sale for the new service as early as December.