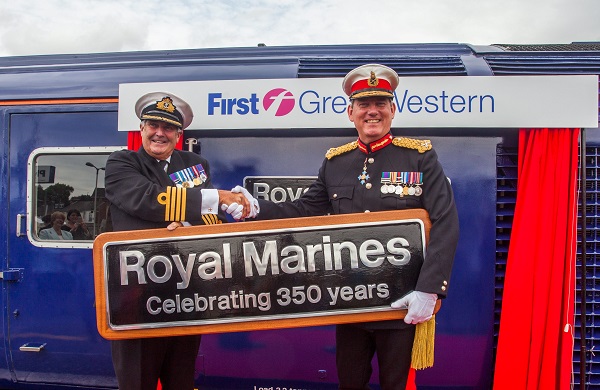 On Saturday 19 July, First Great Western (FGW) named one of their high speed trains to celebrate the 350th anniversary of the Royal Marines. The power car was named “Royal Marines. Celebrating 350 years.”

The train naming formed part of a weekend of activities taking place to commemorate 350 years of unbroken service, committed to protecting and promoting the nation’s security, prosperity and reputation. Welcoming guests and FGW colleagues, Chairman of the FGW Advisory Board, Captain Charles Howeson RNR said:

“I’m delighted we’re able to celebrate the courageous and audacious work of the Royal Marines, especially so close to their headquarters here in Plymouth, a key part of our network. FGW is committed to supporting the communities we serve, and strive to have a positive and significant impact across our network. That’s why marking this anniversary is so important to us.”

Now named, the high speed train will travel along the whole great western network and will be seen by thousands of passengers every day.  Naming the train on behalf of the Royal Marines was Major General David Hook. He said:

The HM Royal Marines were also present at the station. They played music for the guests and passengers on the morning of the event.

EAST MIDLANDS TRAINS – HELPING TO FIND THE NEXT GENERATION OF...