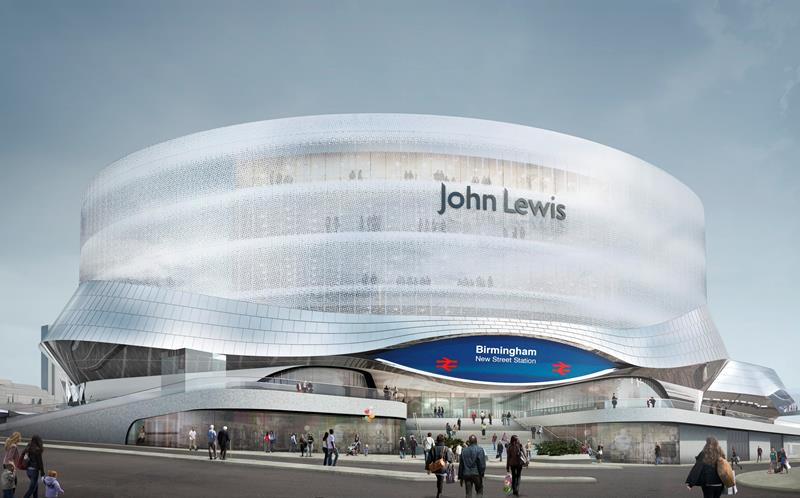 With the atrium roof successfully lowered into place, the official opening of Grand Central and Birmingham New Street station has been confirmed as September 2015.

The next key construction milestone for the project involves an extensive demolition programme to remove approximately 6,000 tonnes of reinforced concrete, to create the stunning atrium space which, on completion, will be the size of a football pitch. Over 95% of the waste material will be re-used on site or recycled.

Nearly 85% of the floor space in Grand Central is now taken and joining the 250,000 sq ft John Lewis at Grand Central are Joules, Cath Kidston, Fat Face, Jolie Papier and Monsoon Accessorize. They join the already announced Kiehls, The White Company and L’Occitane and will be complemented by an exciting array of restaurants and cafes, most of which are making their debut in the city.

Brands including Giraffe, Carluccios, Caffé Concerto, Pho, Tortilla, Tapas Revolution, Crepe Affaire, Yo! Sushi and Square Pie will be opening at Grand Central, with additional restaurants and cafes available on the station concourse. The opening of Grand Central and John Lewis will coincide with the completion of the world-class Birmingham New Street station which will transform rail travel for millions of passengers using it every year.

Grand Central and the redeveloped station will provide customers and passengers with a unique shopping and station experience, with easy access by rail or road from across the West Midlands and beyond, and over 50 million people are expected through the building each year. In addition to the 60 shops, restaurants and cafes in Grand Central, the development will include a further 60,000 sq ft of retail within the station.

“Grand Central is integrated with the modern, redeveloped station which will provide millions of people from across the region with unparalleled access to a range of exciting brands and a premium shopping experience. When Grand Central and Birmingham New Street are launched in September 2015, customers and passengers will see the amazing transformation that will provide a unique shopping and travel experience and a gateway to the rest of the city centre.”

“I’m absolutely thrilled to be taking on this new challenge in the UK’s second largest city. I look forward to establishing our regional flagship shop in the centre of Birmingham and in the heart of the local community.”

“This new role brings me back to Birmingham where I was brought up and where most of my family and friends still live. I can’t wait to recruit a new team of Partners and reveal the shop to our customers during September 2015.”

“The redevelopment of Birmingham New Street station will transform the experience for the millions of passengers who use the station every year and allow it to handle the ever increasing number of people who choose to travel by train. This project is also a great example of how investment in our transport infrastructure can boost the economy. The New Street redevelopment, complemented by Grand Central, will improve the city centre environment in Birmingham, creating new public space to stimulate regeneration and create up to one thousand new jobs for local people.” “The opening of the second and larger phase of Birmingham New Street station will see the completion of a world class station here in the centre of the city and a fitting arrival point for those coming here for business or leisure. The parallel opening of Grand Central in time for Christmas will enhance the shopping and leisure offer in Birmingham and will complement the Bullring, Mailbox, independent shops, and the Jewellery Quarter. Grand Central will also be a great meeting point and with the range and variety of new restaurants it will give people an even wider choice of places to dine when they are here in the city for business or pleasure.”

“The redevelopment of Birmingham New Street station will transform the daily journey of millions of people and the project is also hugely important for Birmingham and the local economy upon which thousands of jobs depend. The scale of the new station highlights the ever increasing demand for rail travel across the country and this is just a small part of the £38billion being invested to maintain and enhance Britain’s railway network over the next five years – more than has been spent since Victorian times. This Government is delivering a real Rail Renaissance for British travellers.”

Virgin Trains on the west coast has unveiled its vision for...