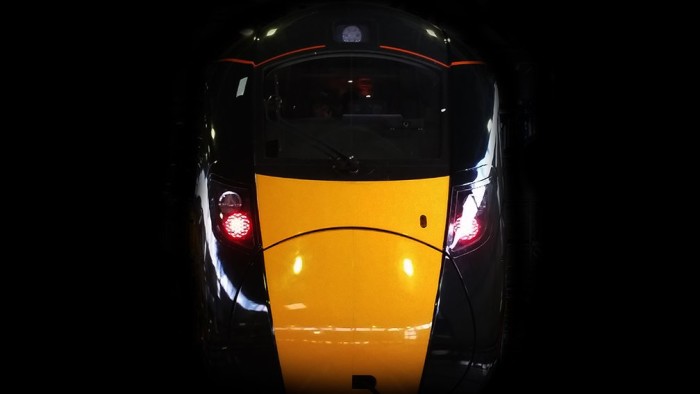 Great Western Railway (GWR) will on Thursday 30 June unveil the first of a fleet of new Hitachi built trains as part of a special journey celebrating 175 years to the day since the very first train ran on the line between Bristol and London.

See inside the driver’s cab with this 360 degree virtual reality video.

The new Hitachi fleet is being introduced as part of the biggest investment on this railway since Brunel, including electrification of the Great Western Main Line. For the first time, guests have been invited to travel on the train.

The new trains will be manufactured in Britain and will include more seats, greater legroom, free Wi-Fi, power sockets at each seat, LCD seat reservation indicators and increased space in overhead luggage racks. The trains start to be introduced into passenger service from next summer on the Great Western Main Line, and from 2018 on services between London and Devon and Cornwall.

To mark this significant investment milestone and to celebrate the 175th anniversary of the full opening of the line, GWR – in a shared event with Agility Trains, Hitachi Rail Europe and Network Rail and attended by Ministers from the Department for Transport – is inviting guests onto a special High Speed Train (HST) from Bristol to Reading to celebrate Brunel’s achievements. Guests will travel through Box Tunnel, one of Brunel’s major engineering triumphs, which when built was the longest tunnel in the world.

Those on board will get off the HST train at Reading, where the Secretary of State for Transport will make a short speech, before boarding the brand new Class 800 (800 004) Intercity Express Train for Paddington.

Great Western Railway Managing Director, Mark Hopwood, said:
“On this special anniversary we are looking not just back at our rich heritage but forward at a transformational investment programme.

“The new trains will result in more frequent and faster journeys and an increase in the number of seats. These, and a range of further passenger benefits, will enable communities and businesses across the Great Western network to prosper and we are delighted to invite observers to witness first-hand the step change electrification and our new fleet will bring.”

Transport Secretary Patrick McLoughlin said:
“Britain’s railways have a glorious past and even brighter future thanks to the record amounts we are investing to modernise the network, deliver better journeys for passengers and drive economic growth.

“The unveiling of Great Western Railway’s first state-of-the-art Intercity Express Programme (IEP) train offers a glimpse of the benefits passengers in the South West and Wales will enjoy from 2017. These include more seats, greater comfort, better reliability and faster, more frequent services.”

Andy Rogers, Projects Director of Hitachi Rail Europe said:
“This is a momentous day for GWR, as it celebrates 175 years of the Great Western Main Line and looks forward to an exciting future for fare-paying customers. The brand new fleet of Hitachi trains that enter into service from mid-2017 will transform passengers’ experience to and from the South West and bring significant benefits to people and communities along one of the UK’s most important railway lines. Hitachi is, therefore, delighted to be showcasing one of its brand new Intercity Express Programme (IEP) trains as part of today’s celebration.”

Andy went on to say;
“Hitachi Rail Europe is extremely proud to be delivering brand new intercity trains to GWR and to be creating some 730 new jobs at our rail vehicle manufacturing facility at Newton Aycliffe, County Durham, an area with a rich railway history of its own.”

Mark Langman, Route Managing Director for Network Rail, said:
“I am delighted to be joining our alliance partner, Great Western Railway, at the launch of their new Hitachi 800 series trains. Network Rail’s Greater West programme is delivering the power and signalling which will allow these fantastic new trains to reach their potential. They will help transform journeys and grow local economies across the West.”

GWR’s modernisation programme will see the age of the entire train fleet slashed by more than half and three million additional seats a year created once electrification is complete. The modernisation work by Network Rail will enhance 235 miles of what is one of Britain’s busiest and oldest railways, helping GWR better connect major towns and cities across the West, with faster, greener and quieter journeys.

Anthony Smith, chief executive of the independent watchdog Transport Focus, said:
“Passengers will be pleased to see new trains coming in on their route. We know that their top priorities include faster, more reliable and comfortable trains – with more of them to serve the increasing numbers of passengers.”

Bombardier Transportation to Showcase its Proven Solutions at AfricaRail 2016