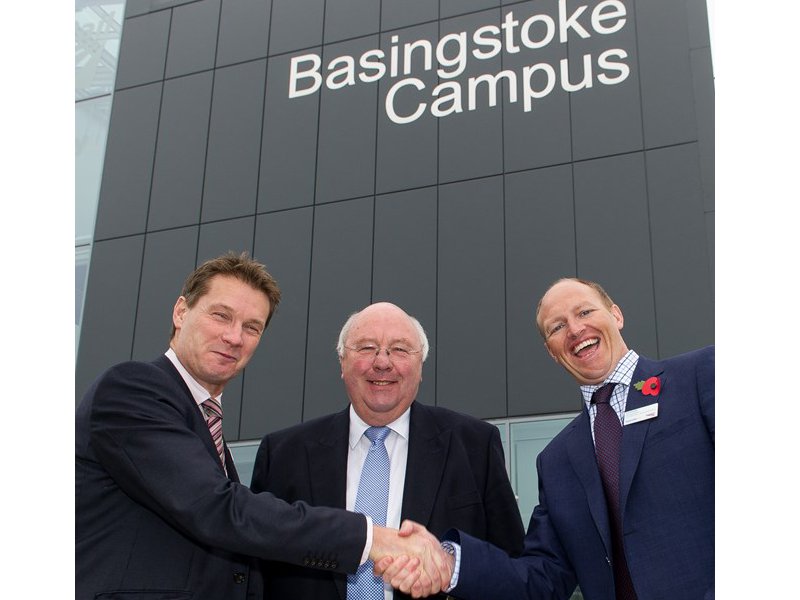 The Basingstoke Campus, the first centre of its kind in the country and a showcase of the unique alliance between Network Rail and South West Trains was officially opened on Monday 2nd November.

Basingstoke is at the heart of one of the busiest railways in Europe and the new Campus is a world class railway training and development centre that will help South West Trains and Network Rail to continue to work together to benefit the railway and its passengers.

The South West Trains-Network Rail alliance was formed in 2012, bringing together for the first time the train operator and the infrastructure provider to provide a better train service for passengers.

The alliance was reshaped earlier this year but continues to bring together the teams which are most closely related to providing a better railway and can jointly deliver the biggest improvements for passengers.

A joint operational control centre will continue at London Waterloo, with Network Rail and South West Trains teams working side by side to safely manage over 1600 train services a day and ensure that a reliable and efficient service is delivered for more than half a million passenger journeys every day.   The joint control, considered to be the ‘beating heart’ of the train service, has delivered some major improvements for customers since the start of the alliance in 2012.

The joint London Waterloo Station team, which has been identified as best practice for the rail industry, will continue to focus on delivering the best service for passengers at the UK’s busiest railway station.  Most recently, the team has been responsible for safely and efficiently moving hundreds of thousands of passengers throughout the Rugby World Cup.

The integrated train planning and performance teams will continue to work together to focus on delivering a right time railway for customers, tackling the root cause of any delay and identifying the best decisions for the benefit of the whole railway.

Other areas where South West Trains and Network Rail will continue to work as an alliance are security and crime prevention, managing a joint charity committee and in training and development at the new Basingstoke Campus.

The campus was formally opened by John Halsall, Network Rail, Managing Director for Wessex Route and Tim Shoveller, Managing Director for South West Trains.  They were joined by local stakeholders and partners, who have played a crucial role in delivering the new campus, including BAM Construction, Basingstoke and Deane Borough Council as well as many of the Network Rail and South West Trains staff who continue to work together at the Campus and elsewhere on the network.

Speaking after the formal opening, John Halsall, said: “Our investment in the Basingstoke Campus provides world-class 21st century training facilities, enabling us to modernise and upskill our people so they can deliver a safer, more efficient railway for passengers as part of our Railway Upgrade Plan.

“The centre will also help us as we evolve our alliance with South West Trains, with all our staff developing side by side.”

Tim Shoveller, added: “We run one of the busiest railways in Europe with over half a million journeys every day and our alliance with Network Rail is absolutely vital in ensuring we can continue to provide the services our passengers rightly expect – both today and in the future.

“Highly trained, motivated and rewarded staff are an important part of this alliance and the Basingstoke Campus will be at the centre of this for years to come.”

Basingstoke at a glance: