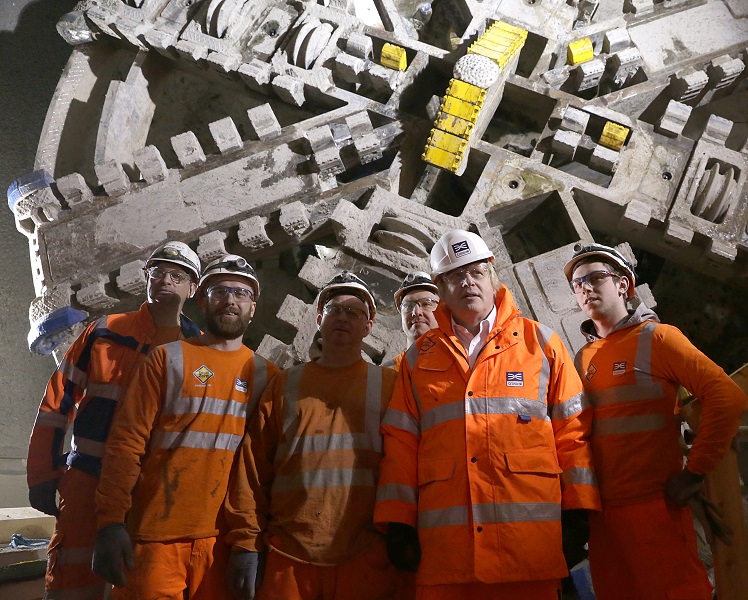 Crossrail’s final tunnelling machines, Victoria and Elizabeth, are currently being prepared to complete the last two 750 metre tunnel drives between Liverpool Street and Farringdon. When they reach their destination and the big east-west breakthrough is complete, all 26 miles of Crossrail’s new train tunnels will have been created. Boris Johnson, Mayor of London, said:
“These hardworking beasts have slowly but steadily been working their way across London underneath our feet. The last time I saw them they were at Canary Wharf, and now nearly six million tonnes of earth has been excavated and their work is almost complete. The project, the largest in Europe, will transform rail services across London and remains on time and on budget.”
“We must capitalise on its success and work to ensure Crossrail 2 becomes a reality. With the government confirming this week the Crossrail 2 route is now safeguarded, and businesses and the public showing overwhelming support for the plan, we are moving even closer to delivering another much needed new rail line for the capital.”

Transport Secretary Patrick McLoughlin, said:
“The scale and complexity of Crossrail’s tunnelling works is astounding and shows British engineering at its best. I congratulate all involved and look forward to the completion of the project which will play a vital role in driving forward our long term economic plan.”

Terry Morgan, Crossrail Chairman, said:
“It’s fantastic that the end of tunnelling is now in sight. For nearly three years, our machines have been inching their way forward beneath the streets of London. Once the tunnelling is complete, we will turn our attention to fitting out the tunnels with the tracks, cabling and all the systems needed to deliver a fully operating railway.”

Tunnelling began in the summer of 2012. In total, eight tunnelling machines have been used to create the new tunnels beneath the capital. Once tunnelling is complete, the thousand tonne, 150m long machines will have excavated around six million tonnes of earth.

Vossloh to propose dividend payment at Annual General Meeting after ...