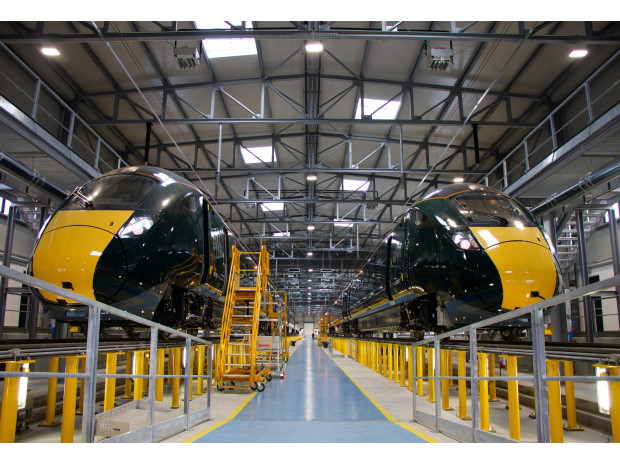 New Intercity Express Trains manufactured in Italy for GWR’s Devon and Cornwall route (via Reading and Wiltshire) are to begin a rare journey across Europe.

The trains will leave Hitachi’s factory in Pistoia, Italy, before travelling by rail through Austria, Germany, and France, arriving days later in the UK via the Channel Tunnel.

Two trains, the first with fully finished interiors, will join three prototype trains already being tested in the South West of England.

From summer 2018 a second wave of 36 modern Intercity Express Trains will begin running from London Paddington, via Reading, Wiltshire, Somerset, along coastal routes in Devon and Cornwall and as far south as Penzance. For the manufacturing of these trains, in addition to the production plant in the UK (which is at full capacity), Hitachi Rail is also using its facility in Pistoia, Italy, making use of a greater production capacity.

The Intercity Express Train harnesses Hitachi Rail’s pioneering Japanese bullet train technology, known for its quality and reliability. It has also been designed to withstand the region’s variable weather conditions, including routes along the Dawlish coast.

Passengers can expect more seats, better on-board facilities and shorter journey times, saving as much as 14 minutes between London Paddington and Penzance.

The entire fleet is fitted with hybrid technology, allowing trains to use both diesel and electric power, meaning passengers can enjoy the benefits of new trains as soon as possible.

Parts supplied from businesses in South West of England

The new trains are seen as a boost for regional economies along the route, providing greater connectivity for businesses and tourist destinations.

GWR’s order of the new fleet has also had a direct impact on firms in the region. Businesses located along the Great Western route were chosen by Hitachi to supply parts for the new Intercity Express trains:

Mark Hopwood, Managing Director at Great Western Railways, said:
“We know how important the railway is to the economies and communities of the South West, and today marks another significant milestone in delivering the improvements we know our passengers wish to see.

“These trains have been privately financed and will help us deliver faster, more frequent services into the South West with no cost to the taxpayer.”

Berry Sas, Projects Director at Hitachi Rail Europe, said:
“We are proud to see our factories producing high quality trains for the South West using many parts sourced from the UK. A strong British supply chain is used in both our UK and Italian factories, and we are delighted to award big contracts to suppliers based along the GWR route”

“The test programme is moving apace ahead of summer entry into service, when passengers will enjoy the benefits of modern intercity trains”

Mary Kenny, Chief Executive Officer at Eversholt Rail, who are financing the deal said:
“Eversholt Rail has invested £497m in these new Class 802 trains, built by Hitachi Rail for operation on Great Western Railway, to modernize the rail connection and passenger experience from Devon and Cornwall to London. The despatch of the first completed trains from Hitachi Rail’s Pistoia’s works marks a significant milestone in the project for all parties and stakeholders”.

Maurizio Manfellotto, Chief Executive Officer at Hitachi Rail Italy, said:
“Manufacturing GWR’s trains in our plant in Pistoia is key to us. These trains, intended for UK, that leave the Italian factory are the emblem of the integration of the Hitachi Group Rail companies. A synergy of skills, experience and innovation in the UK, Japan and Italy, that allows us today to deliver to the customer a state-of-the-art product in terms of technology and comfort to the passenger. “