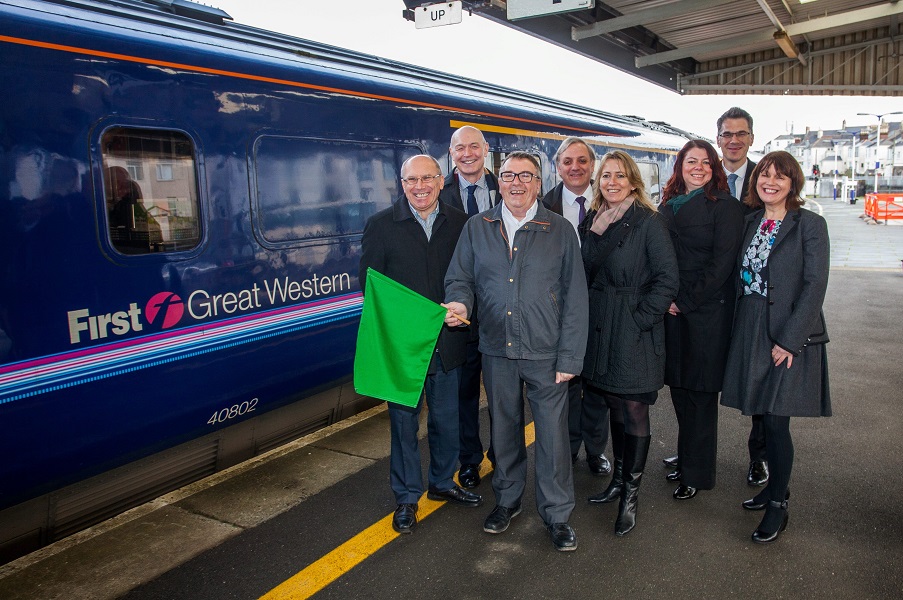 The Leader of Plymouth City Council and key figures in the business community have welcomed a new direct, early morning train service into Plymouth, following the first major redesign of First Great Western’s timetable in Devon and Cornwall for seven years.

Arriving at 1033, a full 40 minutes before the previous first direct service from London, the improved service has been a top aspiration of the City for a number of years. The train was welcomed by representatives of the council, the Chamber of Commerce, the Federation of Small Businesses, and the Local Enterprise Partnership.

The Leader of Plymouth City Council Tudor Evans said:
“I’m really pleased that we are finally seeing this significant step forward for rail links between Plymouth and London”.

“As a city we’ve campaigned long and hard for this. The service will be faster, more direct and arrive earlier into Plymouth.  It’s good for business as it means clients and contacts can do a day’s business here and get back to London in a reasonable time”.

“People will no longer have to hang around for a train from Newton Abbot to be here in the morning, which sends out a much better impression of Plymouth and our friends further along the track in Cornwall”.

“A lot of hard work has gone on behind the scenes at First Great Western to make this happen.”

The 0706 Paddington-Paignton service will now also call at Plymouth, and retimed to arrive 40 minutes earlier into Totnes, Plymouth and stations to Penzance

Improved connections between Paddington and Torbay

First Great Western Managing Director Mark Hopwood said:
“We have been able to make important changes that have gone a long way to support the communities we serve, increasing the number of services in the south west by 143% since 2007″.

“The South West is a key region for First Great Western and one which we are proud to serve. We know the needs of the region are changing and we need to make sure our timetable reflects the requirements of passengers and communities. In particular, these changes we are planning reflect the long standing aspirations of customers across the South West”.

Peter Hartland, Chief Executive of Plymouth Chamber of Commerce said:
“I welcome this new, earlier arrival service from London and First Great Western’s decision to respond to the clear connectivity needs of businesses. Improved connectivity between major conurbations, such as London, is a well-documented driver of economic growth”.

“This development is a welcome step in the right direction for improved, direct, timely services from London to Plymouth. With an earlier arrival time this service offers a positive change for business people travelling from London, offering a more meaningful work day and in turn supporting our aims for local economic growth.”

Over 1,000 rail leaders head to Hong Kong this month