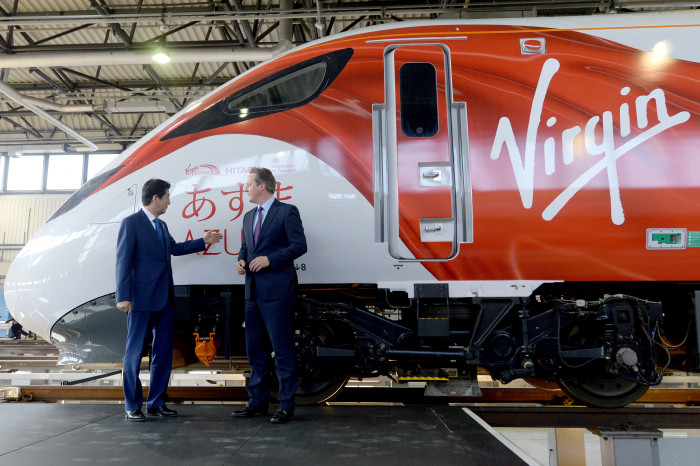 The UK Prime Minister, David Cameron, has seen for himself the Virgin Azuma, the new train which will revolutionise services on the East Coast. The train is the first to be shown in a Virgin livery and was unveiled at King’s Cross by Richard Branson in March.

David Horne, Managing Director of Virgin Trains on the East Coast was at the event and commented,
“The visit was a terrific chance to give the Prime Minister a taste of what is to come on the East Coast under Virgin Trains. We’re already investing tens of millions of pounds in new interiors and engines for our current fleet and are shortly going to introduce improvements to our on-board catering as well as launch additional Edinburgh-London services. The Azuma represents the next step – a completely new fleet which will revolutionise East Coast travel in 2018.”

Literally translated as “East” in Japanese, the Virgin Azuma pays homage to the new train’s lineage and to the East Coast route – a vital transport artery connecting Yorkshire and the North East with London and Scotland. Together with the West Coast franchise, it means Virgin Trains is in prime position to support the development of the Northern Powerhouse. With 65 trains providing an extra 12,200 seats for a new and expanded timetable, the fleet of Virgin Azumas will increase capacity into King’s Cross by 28 per cent during peak time.

Whilst the trains will initially reach speeds of up to 125mph, Virgin Trains has already announced the creation of a cross-industry working group, including Network Rail, to investigate the potential for the East Coast route to enable their operation at 140mph.

The new trains will also have:

Faster acceleration: The Azumas will accelerate more quickly, slicing up to 22 minutes off East Coast journeys and making 4hr London-Edinburgh journeys, and 2hr London-Leeds journeys, the norm. They will accelerate from 0-125mph around a minute quicker than the current fleet1