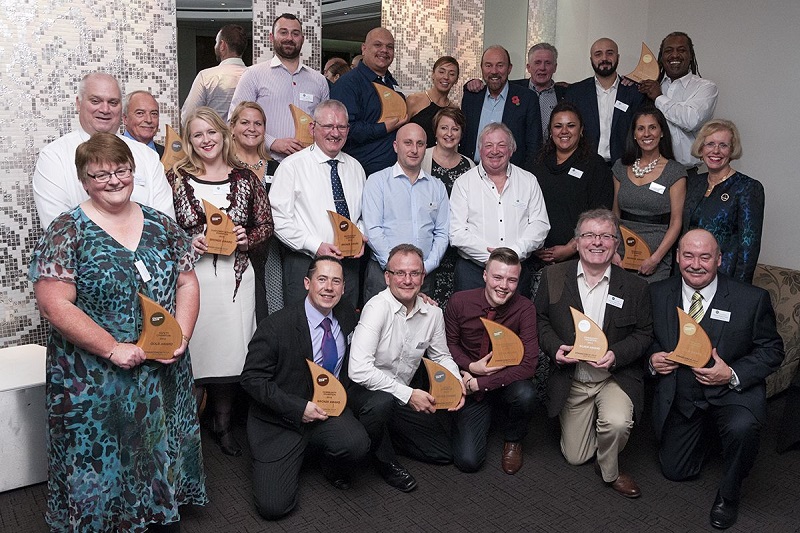 Staff from all three Stagecoach rail companies have been recognised at the 2014 Stagecoach Champions Awards.
The winning employees were honoured for their outstanding achievements at an awards ceremony in London last week. Gold, silver and bronze awards were given out across six categories – Health, Innovation, Customer Service, Environment, Safety and Community.

The awards were judged by Chair of Stagecoach Group’s Health, Safety and Environment Committee, Helen Mahy along with Stagecoach co-founder and Board Director Ann Gloag and Director of Corporate Communications Steven Stewart.

The winners, who came from across the UK as well as from North America and Canada, received a trophy and a cash prize at the awards dinner.
In the Safety category, Darren Ward from East Midlands Trains received the Silver award. Darren has been the driving force behind a number of projects which have included partnership working with unions, British Transport Police and Network Rail to boost level crossing safety; improving suicide prevention and trauma support.
Sarah Hall from South West Trains won a silver award in the Environmental Champion category. As a result of Sarah’s work and that of her team, the company has won awards for reducing energy use and the title of Green Station of the Year. Just as importantly, she has helped her staff gain nationally recognised qualifications.

In the category of Innovation Champion, Treana Hudson from Stagecoach Supertram in Sheffield won the silver prize.  Treana devised the Supersafe community initiative to help promote independent travel for more vulnerable passengers, with mascot Supertram Man at the heart of the campaign. Treana has worked tirelessly to raise the profile of the campaign in local schools and amongst elderly group forums and Supertram Man is also now part of local football club Sheffield Wednesday’s community programme.

In the Community Champion category, East Midlands Trains walked away with both the silver and bronze awards.

Glen Fiddy who is one of only two members of staff at Melton Mowbray station, has transformed the facility and earned praise from customers and staff alike. He got local primary schools involved in a successful community artwork project and in his own time, he has given the station a fresh coat of paint, scoured antiques markets to collect old railway pictures for the station waiting room and has even come into work on days off to clear the snow.

Receiving the bronze award was Peter Clay. Peter’s inspiration, enthusiasm and persistence kickstarted what is now an annual East Midlands Trains charity train initiative – an idea also now taken up by other train companies. The first charity train organised by Peter raised £25,000 for the Railway Children.

Both South West trains and East Midlands Trains staff were recognised in the Customer Service Champion category. Receiving the gold award, Dominic Hill from South West Trains was highlighted for delivering amazing customer service on a consistent basis. One example was after a landslide when was faced with 200 passengers with no immediate transport available. Dominic kept passengers well-informed and in good spirits and when taxis became available, and people were hesitant to put themselves forward, he started a pub quiz with whoever got the question right winning a place in the next taxi.

Yvonne Clay from East Midlands Trains won the bronze award, and was described as the ‘mother figure’ at East Midlands Trains’ Norwich depot.
She has built up great relationships with colleagues and customers as well as raising money for railway charities and volunteering for the Mid-Norfolk Railway. When dealing with a customer who was worried about missing a flight. Yvonne gave him her phone so he could advise ground staff he was running late. She also called a taxi for the customer to have it ready and waiting to take him to the airport.

Awarding the prizes, Helen Mahy said: “I would like to congratulate all of our champions. We had a record number of entries this year and that the job of selecting the most worthy was as difficult as ever.”
“We have a great team of 35,000 employees across the Group who are crucial in delivering our bus and rail services day in, day out. Awards like these can only recognise a small fraction of our people but they remind us of the fantastic work that goes on across the business.”
“We look forward to receiving even more nominations, and hearing about the wonderful work of even more of our employees during next year’s awards.”