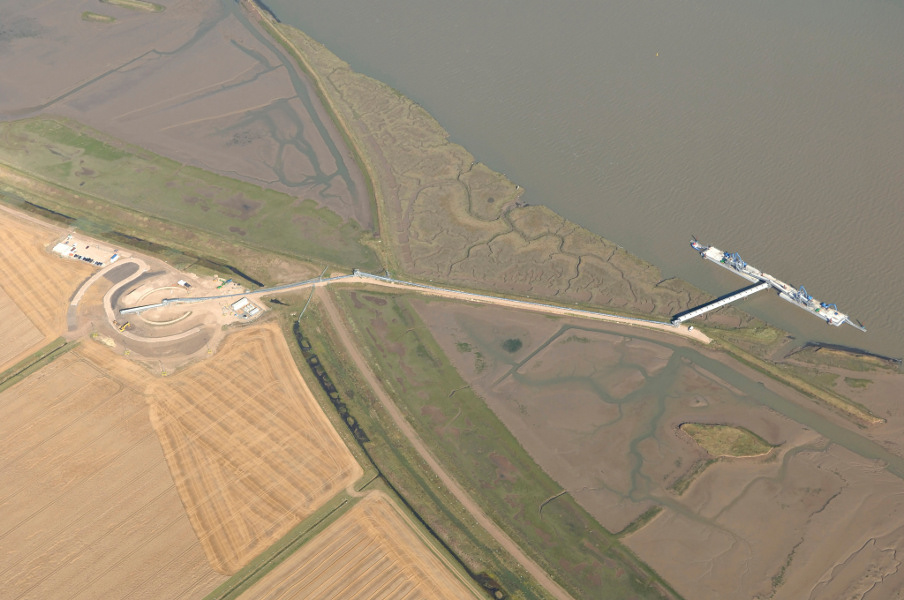 A landmark environmental project made possible due to a unique partnership between Crossrail and the RSPB reached a significant milestone this weekend.

Wallasea Island Wild Coast project, located eight miles north of Southend-on-Sea in Essex, aims to transform 670 hectares of farmland, an area about 2.5 times the size of the City of London, back into the coastal marshland it once was some 400 years ago.

Over three million tonnes of excavated material from Europe’s biggest infrastructure project, Crossrail, has been used to raise part of the island by an average of 1.5m, creating lagoons and other wildlife-friendly features and protecting these areas with new sea-walls. This weekend, the first phase of the project was completed when the new sea walls of ‘Cell 1’ were successfully breached to allow for tidal flow into the marshland.

Four hundred years ago there were 30,000 hectares of intertidal saltmarsh along the Essex coast. Now there are just 2,500 hectares. Intertidal saltmarsh is a crucial wildlife habitat for a wide variety of plants, invertebrates and birds, and acts as an effective sea defence for local communities

Wetland restoration began on Wallasea in 2006 when sea walls were breached on the northern edge of the island. By 2025, the RSPB’s Wallasea Island Wild Coast Project plans to have created 148 hectares of mudflats, 192 hectares of saltmarsh, and 76 acres of shallow saline lagoons. Around eight miles of coastal walks and cycle routes will allow people to get closer to the island’s spectacular wildlife.

Martin Harper is the RSPB’s Conservation Director. He said:
“At a time when nature is in crisis, we believe Wallasea sets a new benchmark showing what’s possible with smart regulation and intelligent partnerships between the private sector and charities.”

“By moving spoil from central London to a part of the coast below sea level and vulnerable to flooding, the partnership is allowing the completion of a major transport project which will boost the economy, while providing an area that will become an area of international importance for wildlife. All sectors including Government now need to exploit this inventiveness to unlock other projects on a similar scale for the benefit of wildlife, people and the economy.”

Andrew Wolstenholme, Crossrail Chief Executive said:
“Crossrail has helped deliver one of Europe’s most significant conservation projects on Wallasea Island. This trailblazing partnership with the RSPB is a key part of Crossrail’s sustainability strategy and demonstrates the benefits that can be achieved when the construction industry and environment groups work together. This major new wetland will be a lasting environmental legacy of the Crossrail project for generations to come as well as supporting economic growth and jobs through an increase in tourism to the local area.”

Wallasea Island will show for the first time, on a large scale, how to ‘future proof’ low lying coastal areas against expected sea level rise and deliver benefits to wildlife.

The RSPB hopes that species such as the avocet, redshank and lapwing will return in significant numbers along with large flocks of brent geese, dunlin, wigeon and curlew in winter. Plants such as samphire, sea lavender and sea aster are expected to thrive.

The new RSPB reserve will also provide the perfect habitat for newly colonising species to the UK such as spoonbills and black-winged stilts.

The Essex estuaries are in the top five most important coastal wetlands in the country and are protected by national and European law.

98 per cent of Crossrail’s excavated material from deep below the capital from Crossrail’s tunnels, stations and shafts has been recycled or re-used, with almost half being shipped to Wallasea Island. At its peak six ships arrived at Wallasea each day, unloading 8,000 tonnes of material. 2,400 shiploads of material were delivered in total, removing over 150,000 lorries from the roads.

The RSPB will require more than 10 million tonnes of excavated material to create the reserve. They are currently seeking partners to provide the remaining seven million tonnes.