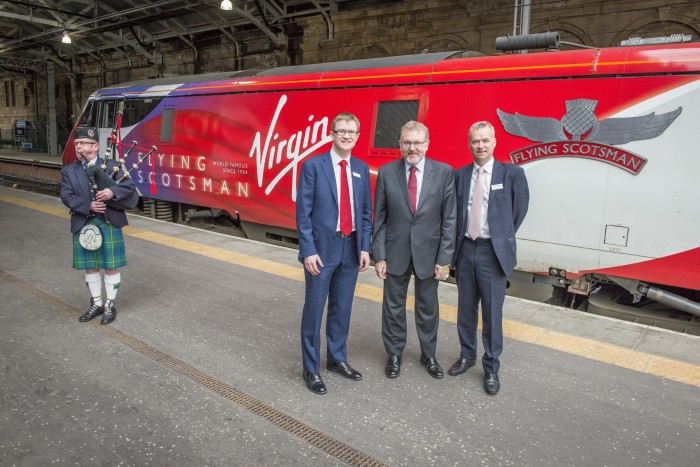 Virgin Trains has seen a surge in cross-border travel bookings after announcing increased services between Edinburgh and London.

A new timetable with 42 additional trains connecting the UK and Scottish capitals every week gets underway today as part of a £140m investment programme in the east coast route. This will add 22,000 seats to the weekly capacity, and mean there is a near half-hourly service between the capitals.

Virgin Trains has already seen bookings for journeys across the border in the first two months of the new timetable increase by 15% compared with the same period last year.

The uplift in journeys was welcomed by the Secretary of State for Scotland David Mundell, who launched the new timetable in Edinburgh this morning.
He said:
“Good connectivity between London and Scotland is vital for our economic security, so this improved Virgin service is really good news. More trains between Edinburgh and London – and all the stops in between – will mean more choice and flexibility for rail travellers in Scotland. It will make it easier for Scottish businesses to reach customers and markets right across the UK. These new services will also bring more visitors to Scotland, helping to boost jobs and prosperity. The UK Government is investing more than £38 billion in the UK’s rail network to improve services across the country. This is part of a long-term plan to improve our transport infrastructure and it is only possible because of the action we have taken to deliver a strong economy over the last six years.”

The timetable was also welcomed by civic leaders in Newcastle, which has benefited from the increased cross-border connectivity.

Councillor Nick Forbes, Leader of Newcastle City Council, said:
“This is great news for passengers and businesses in the region. It will improve connectivity to London and Edinburgh which gives more opportunities for how we spend our leisure time and businesses to seek new markets. I welcome Virgin’s extra investment and I’m confident passengers will take advantage of it.”

Ross Smith, Director of Policy at the North East Chamber of Commerce, added:
“The greater frequency of service and improved connections to both London and Edinburgh are great news for the North East. These links are vital for our regional economy and Virgin’s investment is very much welcome.”

Virgin Trains has unveiled ambitious plans to persuade more people to switch from air to rail travel between the UK and Scottish capitals by investing in service and timetable improvements.

It is today launching free wifi for all customers who book on the virgintrainseastcoast.com website and a new First Class menu overseen by British chef and TV presenter James Martin. This will include a new range of specially created seasonal menus showcasing fresh, local flavours and championing producers on the train operator’s route. New exciting food options will be rolled out for Standard customers in Autumn.

These improvements follow a raft of recent investments, including an ongoing complete refurbishment of train interiorsand a recently completed overhaul of First Class Lounges, including Edinburgh and London, to give them a stylish Virgin twist. The booking horizon has been extended from the industry standard of three months to six months, giving people more time to plan holidays and secure great deals.A programme to completely overhaul train interiors is underway and, from 2018, Virgin Trains will introduce a new fleet of greener, faster, more comfortable Azuma trains, allowing regular Edinburgh-London services to be accelerated to just four hours.

David Horne, Managing Director for Virgin Trains on the east coast route, said:
“We’re really pleased that our new services have proved so popular with the travelling public. We think the combination of service improvements and a half-hourly frequency is a winning combination, and that together with low fares we’ll be able to persuade more people to switch from the inconvenience of air travel to the comfort of our trains.”

More than a million rail passengers travelled between London and Edinburgh last year. Virgin Trains has unveiled ambitions plans to capture half of this market from airlines by the end of its eight-year franchise on the east coast route in 2023.

EUROSTAR IS SET FOR A CRACKING AUGUST BANK HOLIDAY WEEKEND