Home News Secretary of State for Transport returns to Dawlish 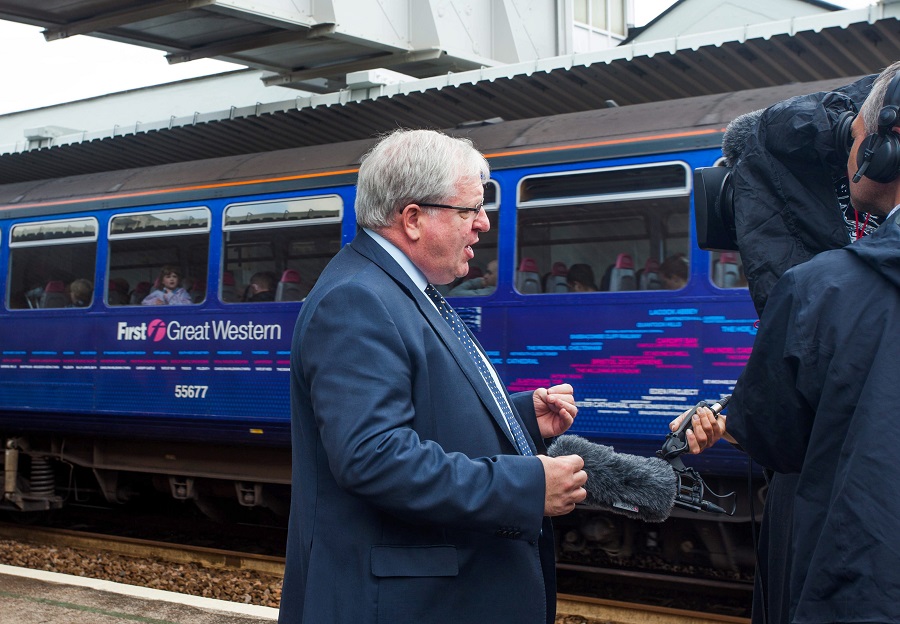 Secretary of State for Transport Patrick McLoughlin MP has visited Dawlish for the first time since the reopening of the railway line in April.
Following eight weeks of painstaking repairs to the storm-ravaged railway, a full service was restored on Friday 4 April. The Secretary of State met Network Rail, FGW, and local MP Anne Marie Morris to discuss rail resilience. First Great Western General Manager West David Crome said:
“This visit shows the commitment the Government has made to invest in rail. The railway plays a vital role in the prosperity of the region and we are grateful that every option is being considered.
First Great Western has had input into the study and has worked with Network Rail to help outline the full range of options open to the Department for Transport.”

Transport Secretary Patrick McLoughlin said:
“The rail line at Dawlish is vital to the economy of the South West. Reopening the line after the severe weather earlier this year was a remarkable feat of engineering and a huge relief to the region.
We are committed to developing a strong and resilient rail network for the South West. We have already announced full funding for a £31 million package of improvements to boost resilience on the route and more than £146 million is being spent on improvements to the Riviera sleeper train service and upgrades to the network that will provide faster journeys into London.
In addition, as part of the government’s long term economic plan to boost jobs and growth, we have asked Network Rail to look at what else can be done to strengthen the resilience of the region’s rail network.”

Mr McLoughlin also met with station staff and volunteers who help to maintain the station. The Friends of Dawlish Station played their part in the high profile re-opening of the main line to Cornwall, giving the station a green revamp with TV gardener Toby Buckland.

The gardening days were organised as part of Citizens’ Rail, an EU project led by the Devon & Cornwall Rail Partnership which aims to get more people involved at stations on the Riviera Line between Exeter and Torbay.