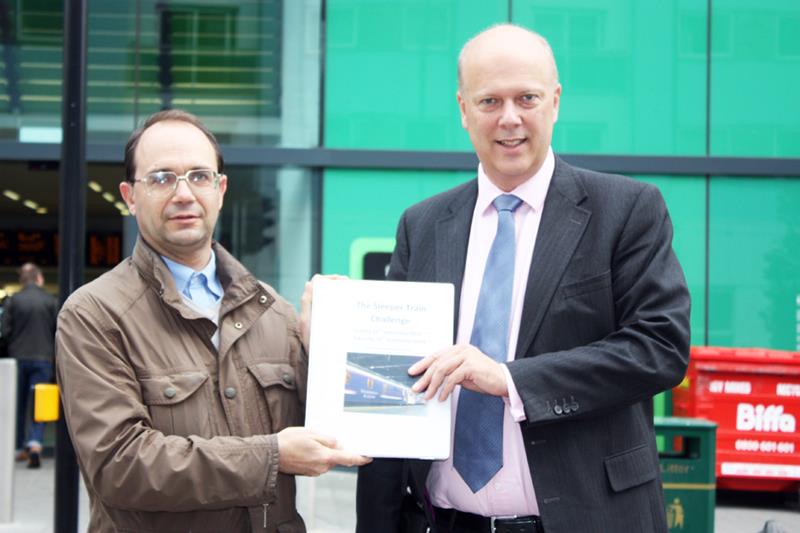 It was already a tough mission for night owl and transport fan Peter Mugridge – a charity train trek by train to all six destinations served by direct sleeper services from London, in just one week.
But Peter decided to make his task even more challenging by returning to London using daytime trains, including East Coast services from Scotland to London, before setting out again on the next overnight journey in his marathon schedule.

Peter’s journeys took him across 5,595 miles of railway, making return trips between London and Penzance, Aberdeen, Edinburgh, Inverness, Glasgow and Fort William – and every one of his train journeys reached its destination on time.
Peter, from Epsom in Surrey, set out on his marathon railway odyssey to raise money for two chosen charities – Railway Children, East Coast’s adopted charity which supports youngsters who live alone on the streets in the UK and abroad, and the Mary Hare School, a residential community special school for deaf young people, in Newbury, Berkshire, where Peter was a pupil.

Peter said:
“The challenge I set myself was to travel to all six UK sleeper destinations from London on consecutive nights, which meant travelling a lot of miles back to London in time to catch the next night’s sleeper departure.
“When I set out, my biggest thought was whether all of my carefully worked-out connections between sleeper and daytime trains would hold together across the week.
“While some days saw relatively easy connections with plenty of contingency time built-in just in case, there were two unavoidably tighter parts of the plan, and it was critical to reaching all six sleeper destinations that nothing was missed.
“I enjoyed travelling on the most scenic lines on Britain’s railways, and arrived back in London spot on time at the end of it all. The whole thing shows how, with a bit of planning, it’s possible to travel the length and breadth of the country by train – though not everyone would choose to do so many journeys in a week!”

The long-distance charity trek was supported by Peter’s local MP, Secretary of State for Justice and Lord Chancellor Chris Grayling MP, who said:
“It’s great to see Peter doing something so different and ingenious to raise money for charity and at the same time to highlight some of the best parts of our rail system. It’s not too late for train buffs and others to chip in to the money he is raising and I hope they will.”

East Coast Engagement and Corporate Responsibility Project Manager Caroline Wilson said:
“Well done to Peter for completing such a marathon mission – we’re glad to hear he enjoyed travelling with East Coast, and that all of his journeys with us arrived on time!
“Peter’s travels show how the speed and comfort of train travel can make even the longest journeys a pleasure. We’re also delighted that Peter has chosen to support the Railway Children, East Coast’s adopted charity, and we wish him every success with his fundraising.”

Peter is continuing to gather sponsorship for his journeys via two dedicated MyDonate websites, giving sponsors a chance to donate to either or both of his chosen good causes. To support the Railway Children, visit
https://mydonate.bt.com/fundraisers/petermugridge1
and to donate to Mary Hare School, visit https://mydonate.bt.com/fundraisers/petermugridge2.

Market Rasen train station gets a facelift thanks to Osgodby Primary...