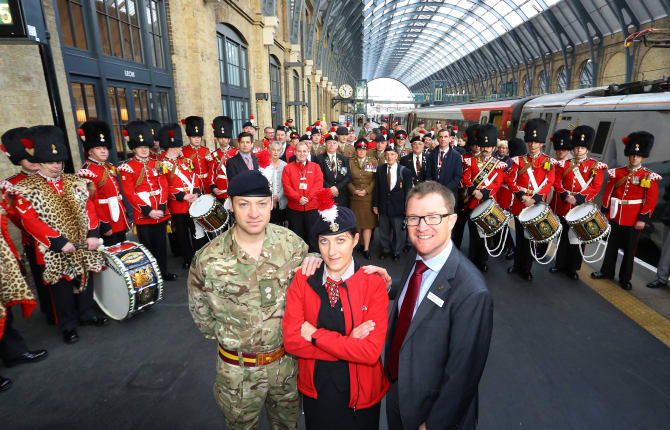 Virgin Trains has worked with The Fusiliers to dedicate a journey today to those who served their country in the Armed Forces.

The 06.00 service from Berwick to London King’s Cross, was saluted by serving Army personnel and veterans at Newcastle, Durham, Darlington, York and Retford stations.

The train, which hosted dozens of veterans and a military band on-board, was headed by Virgin Trains’ “Battle of Britain Memorial Flight” locomotive 91110, one of two of its locomotives which have been dedicated to the Armed Forces.

The Fusiliers’ corps of drums played the popular North East song “Blaydon Races” to welcome the veterans into London King’s Cross station shortly after 10.00 where they were joined by the commanding officer of the First Fusiliers, Lieutenant Colonel Jez Lamb MC, for a short ceremony.

Lieutenant Colonel Jez Lamb said:
“We Fusiliers are incredibly proud of our rich heritage. This year, in particular, we remember the incredible deeds of the Fusiliers who served with such distinction 100 years ago.

“I am therefore very grateful to all the staff at Virgin Trains for this amazing gesture of support. The ‘Remember the Fallen, Remembrance Journey’ allowed us all to honour our forefathers’ sacrifice in a very special and unique way. It was especially poignant this week as tomorrow will mark 100 years since the end of the Battle of the Somme.”

“Many of our 3,100 staff, or their friends and family, have also served in the British Armed Forces, or continue to serve as reservists. We’re incredibly proud of them, and all of those men and women who have served their country.

“It’s been a privilege to dedicate a journey to them during the week of Remembrance Sunday, and for our train to have received a salute by The Fusiliers at stations across England.”

Virgin Trains’ Andrew Kelman, from Newcastle, volunteered to drive the train as he had served in The Fusiliers from 1996 to 2002.

Andrew, who started driving trains in 2008, said:
“It was an absolute honour to drive the train today, and it was an emotional experience as it brought back many memories for me.

“I would not be where I am today without the things I learned serving in the Army, and the salutes we received at the stations were particularly special.”