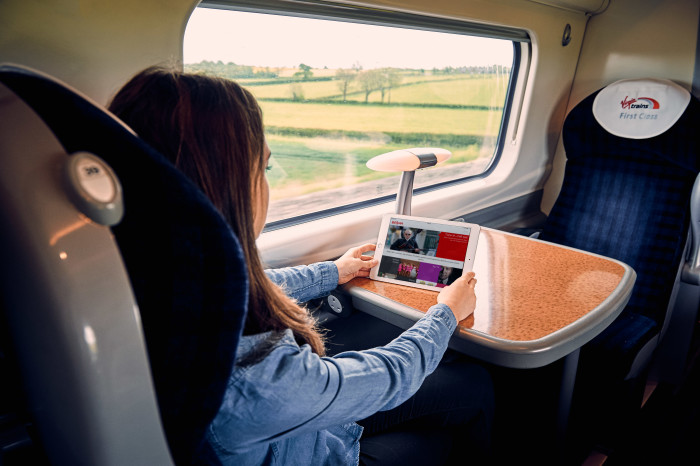 Virgin Trains is today launching its industry-leading, complimentary on-board entertainment service, which is streamed directly to customers’ own devices.

The brand-new app, BEAM, will give customers access to an array of free entertainment through their own device. And with around 200 hours of incredible films, TV episodes, magazines and games there is now even more reason for people to take a Virgin train.

BEAM content includes a selection of classic and new films such as The Wolf of Wall Street, Breakfast at Tiffany’s, Bridesmaids, Theory of Everything and Despicable Me 2 as well as a mix of popular box sets and TV series fromHouse of Cards, Poldark and Fortitude. To keep the kids busy, BEAM will have a separate section for children, playing popular TV shows like Peppa Pig, Ben 10 and Horrible Histories. A selection of leading magazines will also be available, including Newsweek, Men’s Health, Top Gear, Total Film, Hello, Grazia, Living Etc., Ideal Home and Marie Claire.

To celebrate its launch, Virgin Trains has partnered with Hollywood blockbuster Independence Day: Resurgence, the sequel to the Oscar-winning Independence Day which is also available on BEAM.An Independence Day: Resurgencetrain-wrap is being unveiled at London Euston today, with presenter Alex Zane showcasing the new train design to director Roland Emmerich and cast members, Liam Hemsworth and Jeff Goldblum, who each have a carriage decorated with images of their characters on the side.

The industry-leading on-train entertainment service was developed by Virgin Trains in conjunction with GoMedia. The entertainment includes films which are updated monthly and the magazines’ latest issues.

The BEAM entertainment system will be complimentary to all Virgin Trains customers. To access the huge selection of entertainment, customers need to simply download the BEAM app from the Apple or Android app store on their phone or tablet before they get on-board, either at home or by using the free station Wi-Fi. And if the destination arrives before the end of the film, then BEAM will remember exactly where it left off, allowing customers to finish their new favourite viewing on the return leg.

Patrick McCall, Co-Chairman for Virgin Trains, said,
“The new BEAM app will make our passengers’ journeys fly by, feeling like they’ve arrived at their destinations before they know it. We’ve worked really hard to provide a fantastic range of entertainment to cater to all of our customers’ tastes and are really proud to offer this service that is the first of its kind to the train industry. At Virgin Trains we pride ourselves on continuously improving our customers’ on-board experience and so will continue to update the content on BEAM to guarantee our passengers have the latest entertainment on offer. The new service is more advanced than the systems currently available on planes as customers use their own devices, which normally have larger screens with better picture quality than standard seat-back devices.”