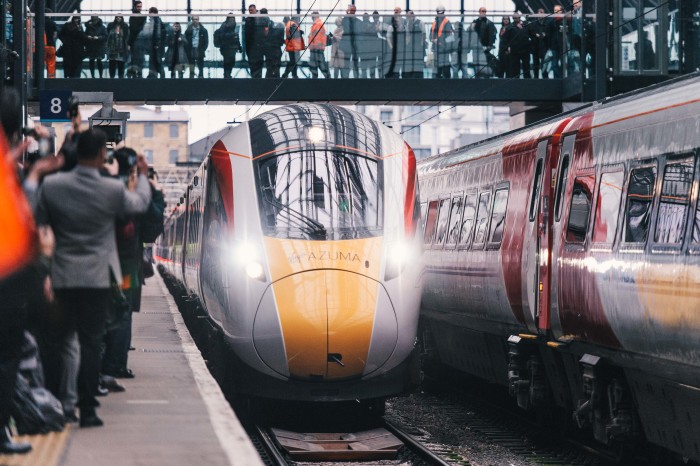 Virgin Trains has unveiled the first of its new fleet of trains in a ceremony at King’s Cross attended by Sir Richard Branson. Set to revolutionise travel on the East Coast from 2018, the Virgin Azuma will be one of the most advanced trains on the UK’s rail network, and will embody the customer-centric approach which Virgin Trains is famous for.

Literally translated as “East” in Japanese, the Virgin Azuma pays homage to the new train’s lineage and to the East Coast route. With 65 trains providing an extra 12,200 seats for a new and expanded timetable, the fleet of Virgin Azumas will increase capacity into King’s Cross by 28 per cent during peak time.

Whilst the trains will initially reach speeds of up to 125mph, Virgin Trains has today announced the creation of a cross-industry working group, including Network Rail, to investigate the potential for the East Coast route to enable their operation at 140mph.

Secretary of State for Transport, Patrick McLoughlin, said:
“The state-of-the-art Intercity Express trains heading to Virgin will transform rail travel for passengers between London, the north east and Scotland. These new trains, combined with Virgin’s exciting plans for the franchise, will provide more services, more seats, and faster journeys, helping to place passengers at the heart of the railway.”

Sir Richard Branson, founder of the Virgin Group, said,
“This is a hugely important moment for passengers on the East Coast. A line which has witnessed the historic Flying Scotsman and Mallard will now see passenger services transformed with the UK’s most advanced long distance trains. Our customers on the West Coast have already seen what Virgin can bring to train travel and how the Pendolinos have made a huge difference to speed and comfort. Our new fleet of Azumas will bring a similar transformation to the East Coast, and propel one of the UK’s most prestigious lines into the 21st century.”

The new trains will also have:

Faster acceleration: The Azumas will accelerate more quickly, slicing up to 22 minutes off East Coast journeys and making 4hr London-Edinburgh journeys, and 2hr London-Leeds journeys, the norm. They will accelerate from 0-125mph around a minute quicker than the current fleet 1

New direct services: The faster journeys will make direct routes to new destinations such as Middlesbrough and Huddersfield possible, as well as a big increase in through services to places such as Harrogate and Lincoln

Greater comfort: The trains will have some of the best leg-room on the rail network, as well as ergonomically designed seats in both first and standard

Virgin’s unique feel: Both the interior and the exterior of the new fleet with have that distinctive Virgin atmosphere

Lower emissions: The trains will be lighter and more energy efficient, making them some of the most environmentally friendly in the UK

Improved facilities: The trains will have faster and free Wi-Fi, an improved traffic-light reservation system2, power sockets for every seat and more overhead luggage space

Buffet cars: An onboard shop is a key part of the experience for passengers

David Horne, Managing Director of Virgin Trains on the East Coast, said,
“Since Virgin Trains launched services on the East Coast in 2015 we have committed more than £40m to improving our existing fleet for passengers. As part of this we’re bringing in brand new interiors with new seats in both first and standard, new carpets and mood-lighting – a first for trains in the UK. I’m delighted that today we have been able to showcase how that transformation will continue, with the first of our brand-new Azumas alongside one of our existing spruced-up fleet. We’ve already celebrated the return of the restored Flying Scotsman to the route and now we are able to celebrate the stars of tomorrow, count down to 2018, and usher in a new era for the East Coast.”

The Azumas are being made by Hitachi at their rail vehicle manufacturing facility in Newton Aycliffe, County Durham – meaning the Virgin Trains fleet is being made on the East Coast for the East Coast.

Karen Boswell, Managing Director of Hitachi Rail Europe, said,
“Hitachi has a long and proud heritage producing top quality, high-speed trains, going back to 1964 when our first ‘Bullet Train’ entered passenger service in Japan. We are, therefore, thrilled to be delivering the trains which from 2018 will transform the journey experience for tens of thousands of Virgin Trains customers travelling between London and Scotland along the East Coast. We are doubly proud that these new trains for the East Coast are being manufactured right here in the UK, creating some 730 new long-term jobs, engineering careers and apprenticeships.”

Virgin Trains on the west coast has unveiled its vision for...