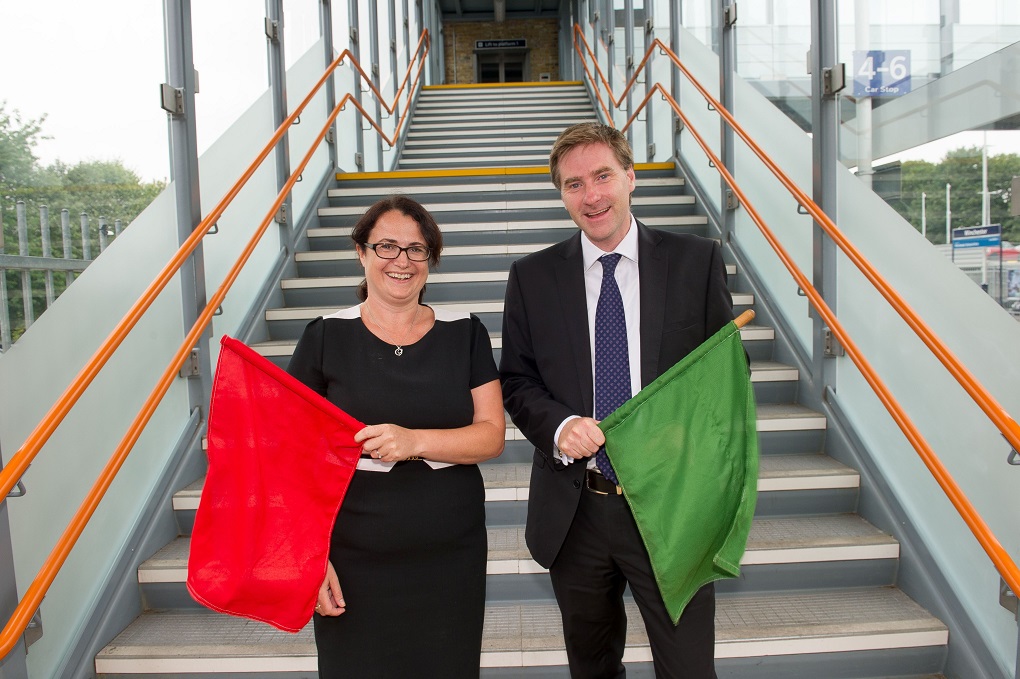 Passengers travelling from Winchester station are now benefiting from a £3.7 million improvement scheme that has improved access and delivered more than 100 extra car parking spaces at the station, increasing the total number of parking spaces by 25%.  Steve Brine, MP for Winchester and Sam McCarthy, Commercial Director of  the South West Trains-Network Rail Alliance, officially opened the new  station footbridge and car park today (18 July 2014).  A £2 million scheme, delivered as part of the Government’s Access for All programme, to provide a new footbridge and lifts at the station will provide improved access for the 4.5 million people using Winchester station every year.  In addition, a new decked car park has now been opened at the station providing more than 100 extra spaces for passengers. The £1.7 million scheme, funded and promoted by the Department for Transport’s Station Commercial Property Fund (SCPF) has also enabled new decked car parks to open at Fleet and Farnborough stations.  Transport minister Baroness Kramer said: “The work at Winchester will make  a real difference to passengers, making it easier for people to travel to  work and leisure opportunities, and in turn helping to secure the UK’s  long-term economic growth. More people than ever before are using our railways, and we are committing £38bn over the next five years to improve and maintain the network.” Steve Brine MP for Winchester and Chandler’s Ford said: “I am really pleased with these improvements which significantly take Winchester Station forward.  When I became the MP here disabled passengers sometimes got a taxi from one side of the platform to the other and I remember raising this in Parliament as we bid for Government money under the Access for All scheme that has funded the new footbridge and lifts.  I think it fits in really well, looks as if it was always here.” “The new decked car park is also a major improvement and while we take seriously the walk and cycle routes into Winchester station, I also represent many rural areas outside the city who are I know delighted with the new capacity.  The final part of these improvements is to now drive  through the new footpath leading from the car park out onto the Andover  Road so this event was a good chance to get an update in that respect. All part of the safety improvements, especially late at night, which we all agree are needed at the station.”  Sam McCarthy, Commercial Director for the South West Trains-Network Rail Alliance, said: “Our stations are the gateway to our services and we want to make it as easy as possible for people to access our stations and trains.  We would like to thank the Department for Transport for their support in driving forward these improvements which will make a huge difference to the 4.5 million passengers using Winchester station every year.” The Access for All programme is managed by the Department for Transport which aims to improve access to railway stations.   Over the past year, £20 million has been invested across eight stations on the South West Trains’ network providing accessibility improvements such as new lifts, lower counter ticket windows as well as new accessible toilets. The programme also includes building and renewing footbridges.   Step-free stations offer accessible routes from entrance to platform.   Making stations more accessible not only benefits disabled people and those with reduced mobility, but also elderly passengers or those with children, heavy luggage or shopping.