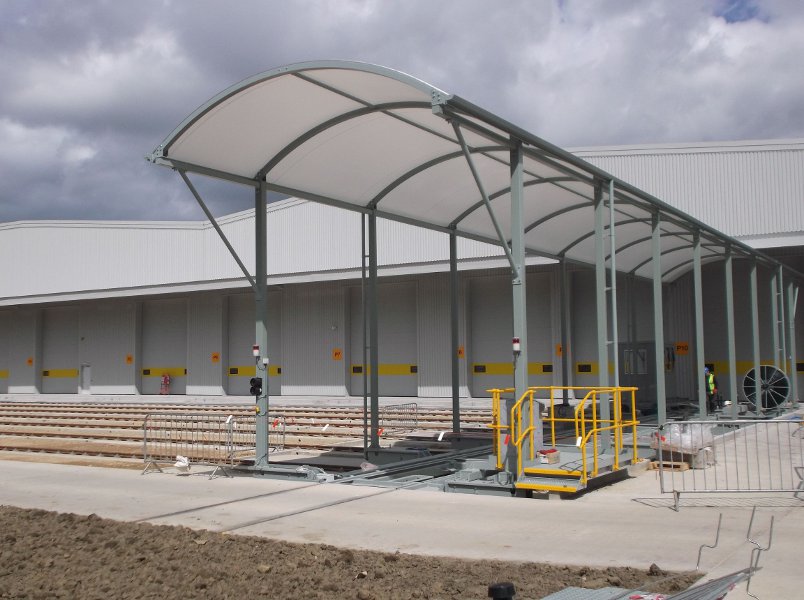 The Newton Aycliffe facility is using a pair of 80 tonne traversers developed by Sheffield-based Mechan to move vehicles along the production line. Mechan’s traversers use a rail mounted bridge to move carriages between 33 tracks inside the facility and out to the test area. The internal unit was specified with a bespoke low profile design and four metre long hydraulic ramps, to allow traffic to pass through the traverser pit when it is not in use. The external installation has a more conventional construction and was fitted with a canopy to protect Hitachi Rail’s new vehicles from the elements.

The traversers, designed, built and installed by Mechan, are part of a series of orders from IEP facilities across the UK. The firm has supplied a set of 40 lifting jacks and an equipment drop to North Pole in west London and a further two equipment drops to Stoke Gifford near Bristol. It is currently working on a three road equipment drop, 40 lifting jacks and two bogie turntables for a new train maintenance centre being constructed in Doncaster.

Richard said:
“It was an honour to attend Hitachi Rail’s official opening ceremony and see firsthand the integral part our equipment is playing in this impressive facility. No two traversers are ever the same and their design and implementation is always a challenge due to their sheer size. We have worked closely with the project team at Newton Aycliffe to ensure these behemoths perform efficiently and everyone is very pleased with the result.”

Crossrail has received a green light

Alstom puts into service the Deirut section of the Beni Suef...