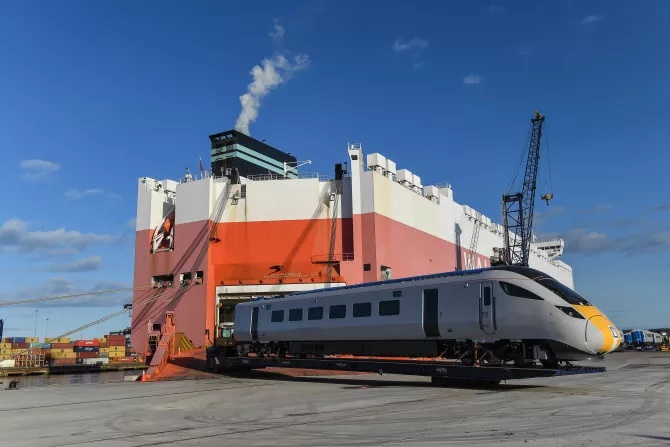 The two five-cartrains will form part of Virgin Trains’ new Azuma fleet and will be the first used for training on-board crew and drivers.

Virgin Azuma trains will transform travel and customer experiences when they arrive on the East Coast Main Line from December this year. The fleet of 65 trains will provide an extra 12,200 seats, offer the potential to enable faster journeys and support a big increase in through services from London to places such as Bradford, Harrogate and Lincoln.

Virgin Trains staff will soon get a hands-on experience of using new Azuma trains. The two new Azuma trains which arrived at Teesport today will be used to teach on-board crew and drivers how to operate the trains when passenger services start later this year. Virgin Trains have already begun driver training using Azuma simulators at King’s Cross, Leeds, Newcastle and Edinburgh stations.

Hitachi, the builder and maintainer of the new Azuma fleet, now have five Azuma trains for testing.

Passengers have already been catching glimpses of the new trains as Hitachi steps up its rigorous test programme.

Hitachi’s UK factory in County Durham will begin building Azuma trains this summer. The factory at Newton Aycliffe, situated a short distance from the East Coast Main Line, is home to 1000 employees, including 50 apprentices.

Hitachi has also built a new £80million train depot in Doncaster to maintain the new fleet.

Andy Rogers, Programme Director at Hitachi Rail said: “We are proud to be building a fleet inspired by Japanese bullet-train technology here in the UK. Our comprehensive test programme is making great progress with the new trains performing very well on the East Coast main line.”

Aileen Jordan, Azuma Director at Virgin Trains on the east coast, said: “We’re excited to have reached yet another milestone with the arrival of these two trains and with them, the opportunity for our drivers and onboard crews to use these for training ahead of Azuma coming into service from later this year.”

Geoff Lippitt, Business Development Director, commented: “The welcomed arrival of the new Virgin Azuma trains at Teesport, marks another important milestone for Hitachi and the wider North east region. Since opening the Newton Aycliffe production facility back in 2015 and benefiting from the region’s unrivalled manufacturing skills base, Hitachi has been a much-needed boost to the regional economy. Teesport’s partnership with Hitachi, as primary port of choice, for the importation, storage and handling of rail cars is a role we are very proud to undertake.”