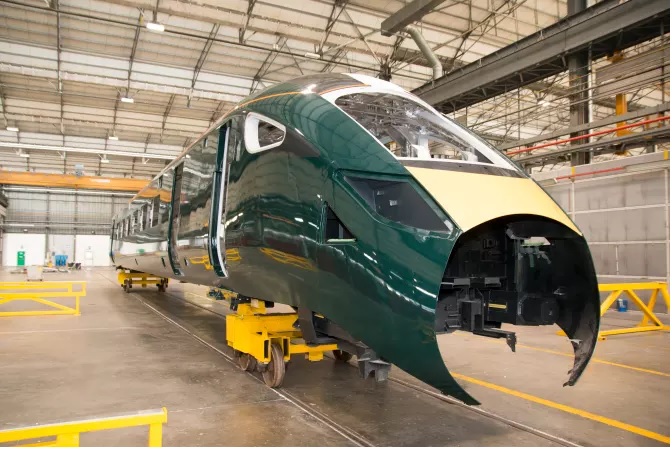 Hitachi’s UK manufacturing facility has already built its first train for Great Western Railway (GWR), which is due into passenger service later this year.

The delivery of InterCity Express Trains to GWR will transform passenger experience for routes connecting London to Wales and the South West of England.

From 2018 a second wave of new trains will begin running as far south as Penzance along coastal routes in Devon and Cornwall. Work has started in Italy on these trains today.

The entire fleet of 93 trains will be in passenger service by the end of 2019.

The fleet is fitted with bi-mode technology, allowing trains to use diesel and electric power, meaning even whilst infrastructure modernisation takes place passengers can enjoy the benefits of the new trains.

The fleet’s design ensures it can withstand the region’s weather conditions, including routes along the Dawlish coast.

Building the new InterCity Express Train fleet
Hitachi is utilising manufacturing facilities in the UK and Italy to ensure the entire fleet is in passenger service by the end of 2019.

The first wave of new trains that passengers will experience is being built at Hitachi’s UK manufacturing facility at Newton Aycliffe, County Durham.

Meanwhile, work has now begun near Florence at Hitachi’s manufacturing facility in Pistoia, where the second wave of the fleet will be constructed. The trains that are built in Italy will predominately run on passenger services connecting London to Devon and Cornwall.

“The first UK built Intercity Express Train rolled off the UK production plant last December for introduction in passenger service later this year, and it is great to see work on the fleet for Devon and Cornwall progress.”

“To make sure passengers get the new trains as soon as possible Hitachi is using its factories in Italy and the North East of England, where our skills and expertise are entirely complementary.”

Notes on testing and manufacturing
Construction work beginning in Italy follows GWR’s decision in 2015 to extend their fleet size, allowing for new trains to reach Devon and Cornwall.

The fleet extension of 36 additional trains (22×5 cars and 14×9 cars) will be phased into passenger services from summer 2018, with the final train entering service in 2019.

In recent years Pistoia has become renowned for building industry leading trains, including very-high speed and regional trains for Italy such as the Frecciarossa (“Red Arrow”).

The first newly built train to arrive from Italy will be winter 2017.

East Midlands Trains Named As Passenger Operator Of The Year At...