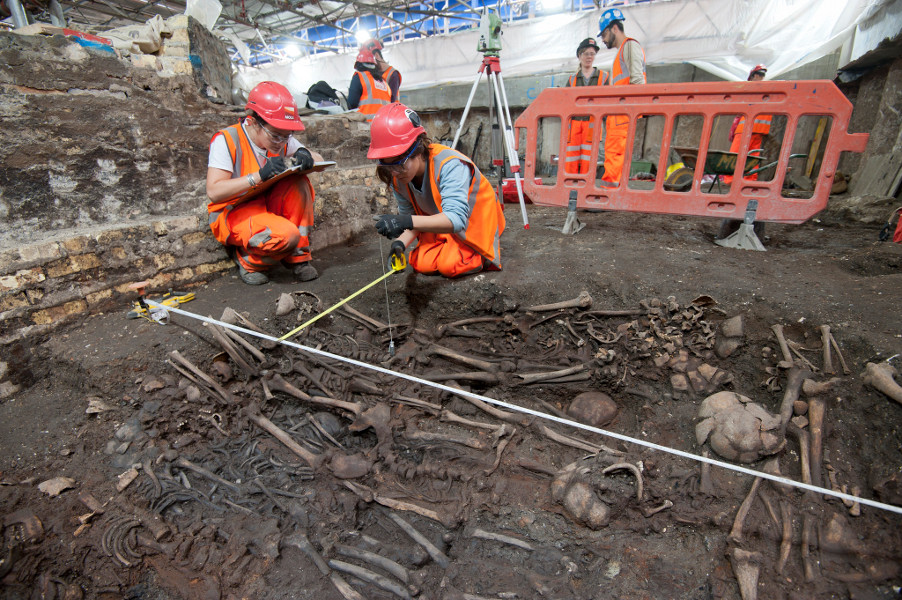 A mass burial site suspected of containing 30 victims of The Great Plague of 1665 has been unearthed at Crossrail’s Liverpool Street site in the City of London.

The discovery was found during excavation of the Bedlam burial ground at Crossrail’s Liverpool Street site, which will allow construction of the eastern entrance of the new station.

Jay Carver, Crossrail Lead Archaeologist said:
“The construction of Crossrail gives us a rare opportunity to study previously inaccessible areas of London and learn about the lives and deaths of 16th and 17th Century Londoners.”

“This mass burial, so different to the other individual burials found in the Bedlam cemetery, is very likely a reaction to a catastrophic event. Only closer analysis will tell if this is a plague pit from The Great Plague in 1665 but we hope this gruesome but exciting find will tell us more about the one of London’s most notorious killers.”

A headstone found nearby was marked ‘1665’, and the fact the individuals appear to have been buried on the same day, suggest they were victims of The Great Plague. The thin wooden coffins have collapsed and rotted, giving the appearance of a slumped and distorted mass grave. The skeletons will now be analysed by osteologists from Museum of London Archaeology (MOLA), and scientific tests may reveal if bubonic plague or some other pestilence was the cause of death.

Mike Henderson, Senior Osteologist at MOLA, said:
“The concentration of burials in this pit provides a new focus for scientific testing and study. We hope detailed osteological analysis will help determine whether these people were exposed to The Great Plague and potentially learn more about the evolution of this deadly disease.”

Excavation of the Bedlam burial ground began earlier this year. The team of archaeologists from MOLA have carefully excavated over 3,500 skeletons from what is, in archaeology terms, London’s most valuable 16th and 17th Century cemetery site.

The Bedlam burial ground was in use from 1569 to at least 1738, spanning the start of the period of Elizabethan explorers, the English civil wars, the Restoration of the Monarchy, Shakespeare’s plays, the Great Fire of London and numerous plague outbreaks.

The Bedlam burial ground, also known as the New Churchyard, was located at the western end of Liverpool Street. The recent excavation suggests that 30,000 Londoners were buried at Bedlam between 1569 and 1738. It got its name from the nearby Bethlehem Hospital which housed the mentally ill, although only a small number of Bedlam residents are believed to have been buried there.

Hitachi Rail Italy to manufacture AT300 trains for GWR in the...